Blue Alaska: “Vote for your rights!” 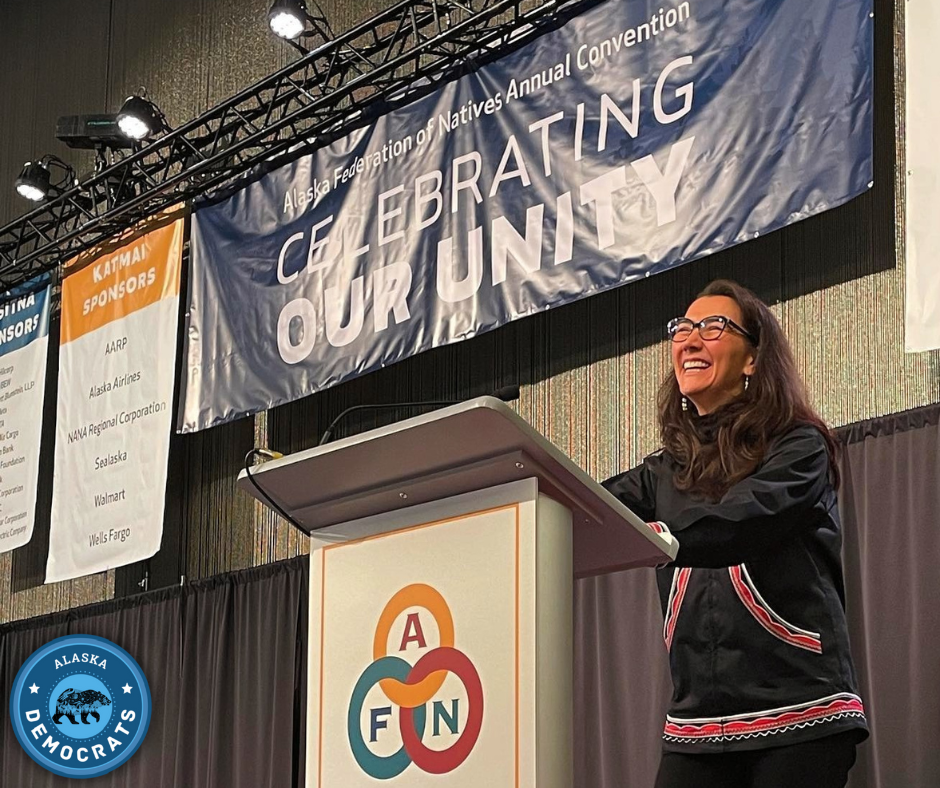 This week Rep. Peltola received an enthusiastic and historic welcome as the keynote speaker of the Alaska Federation of Natives Annual Convention, which serves as the principal forum and voice for the Alaska Native Community in addressing public policy and government!

The theme of the conference was the power of unity, something the Congresswoman said resonated with her.

Then on Saturday, she was out doing some rockin’ in Anchorage with Portugal. The man! 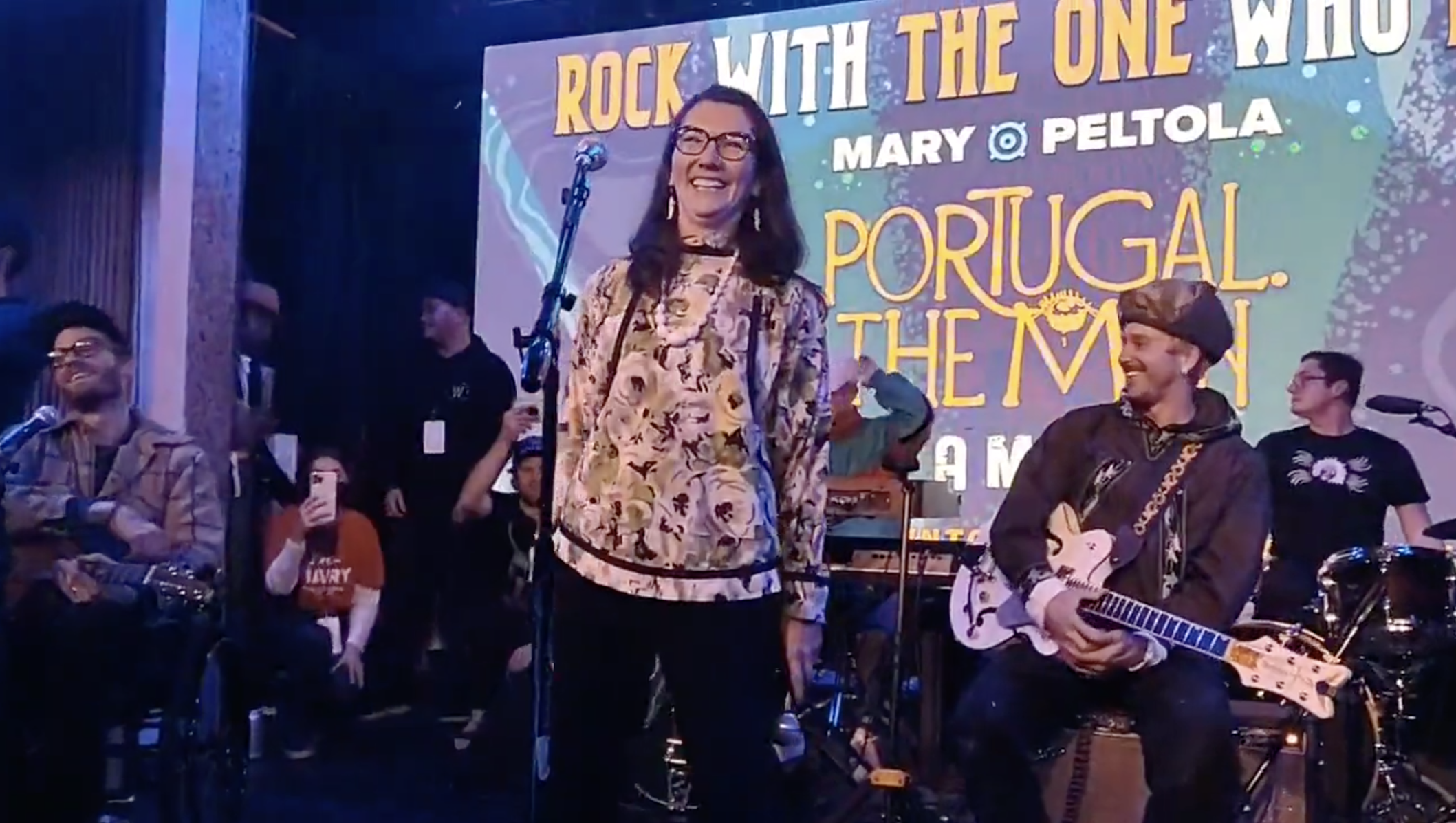 It seems that only yesterday Alaskans elected Mary Peltola as their trusted voice in the U.S. House of Representatives. And now, it’s time to do it all over again!

Early in-person voting has begun! Visit IWillVote.com for early voting centers, election day polling location information, and important dates & deadlines for voting in the November 8 General Election! And, of course, you can find a list of exceptional candidates ADP supports on our website. 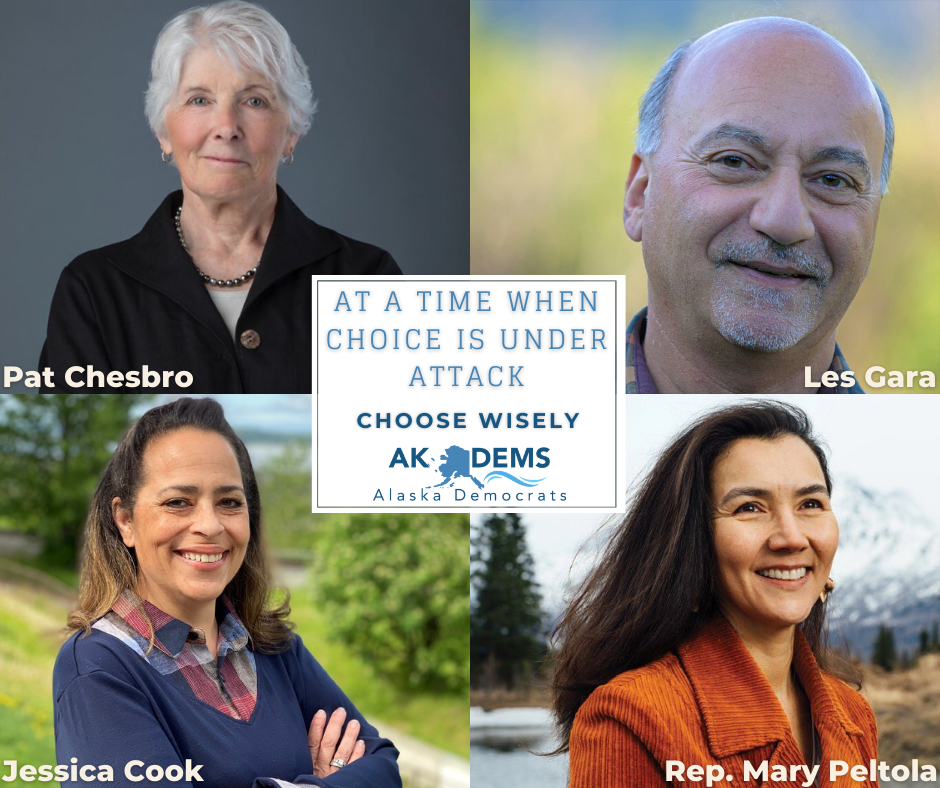 We need you to vote blue all the way up and all the way down your ballots this year because pro-forced birthers Alaska Governor Mike Dunleavy, Mia Costello, Kathy Henslee, and other Republican extremists want to strip women of their right to an abortion, even in cases of rape and incest!

Every candidate ADP is supporting this cycle will fight like hell to ensure abortion access remains legal in Alaska, but they need your vote so they can stand up for your rights! 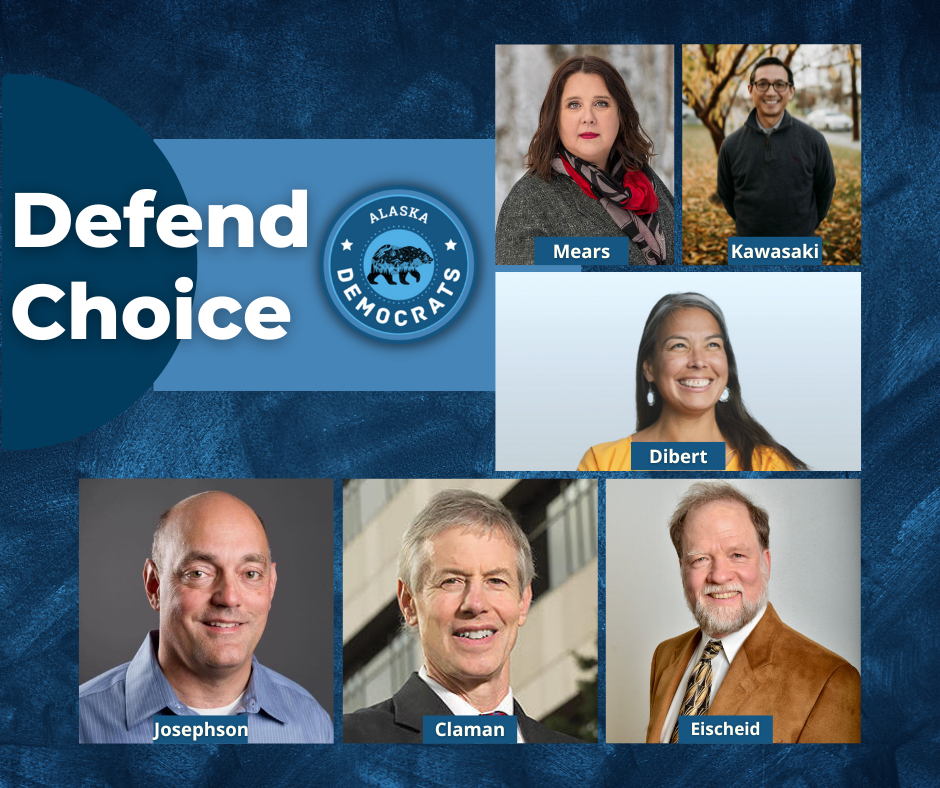 Electing Democratic candidates in November is critical, and the future and direction of our state depend on you exercising your right to vote in the November 8 General Election! Go vote! (no, seriously, stop reading and go vote). 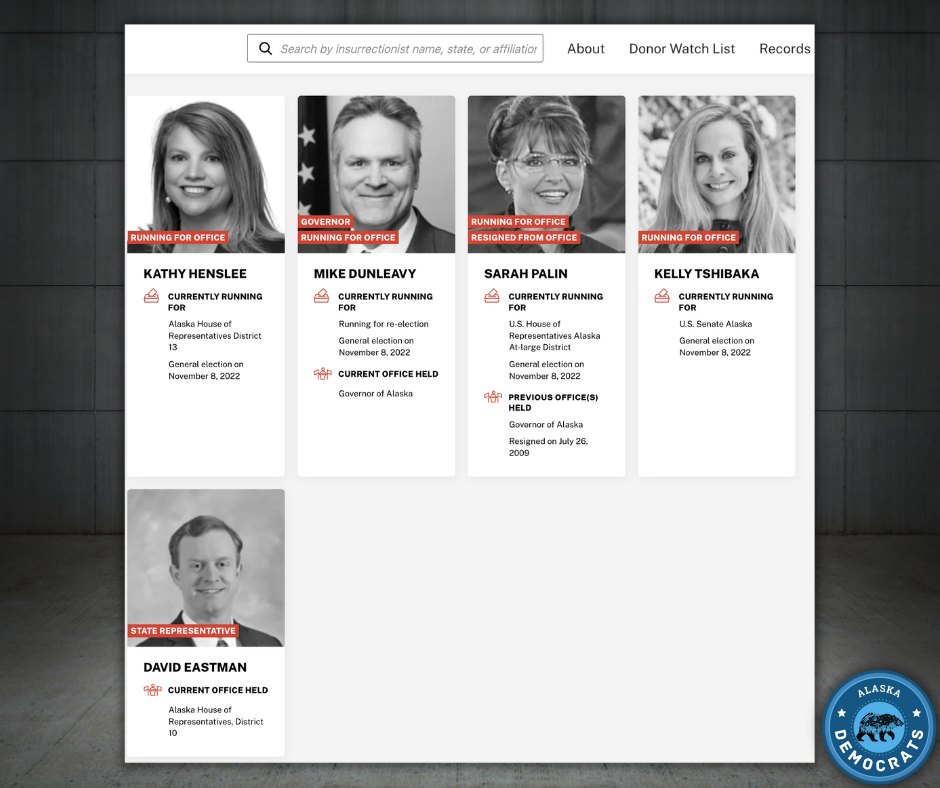 But it seems that more Alaska Republicans should be listed in the Insurrection Index…especially Jennie Armstrong’s primary opponent and longtime “Save Anchorage” member Liz Vazquez who shared this crazy post to Facebook on December 9, 2020. 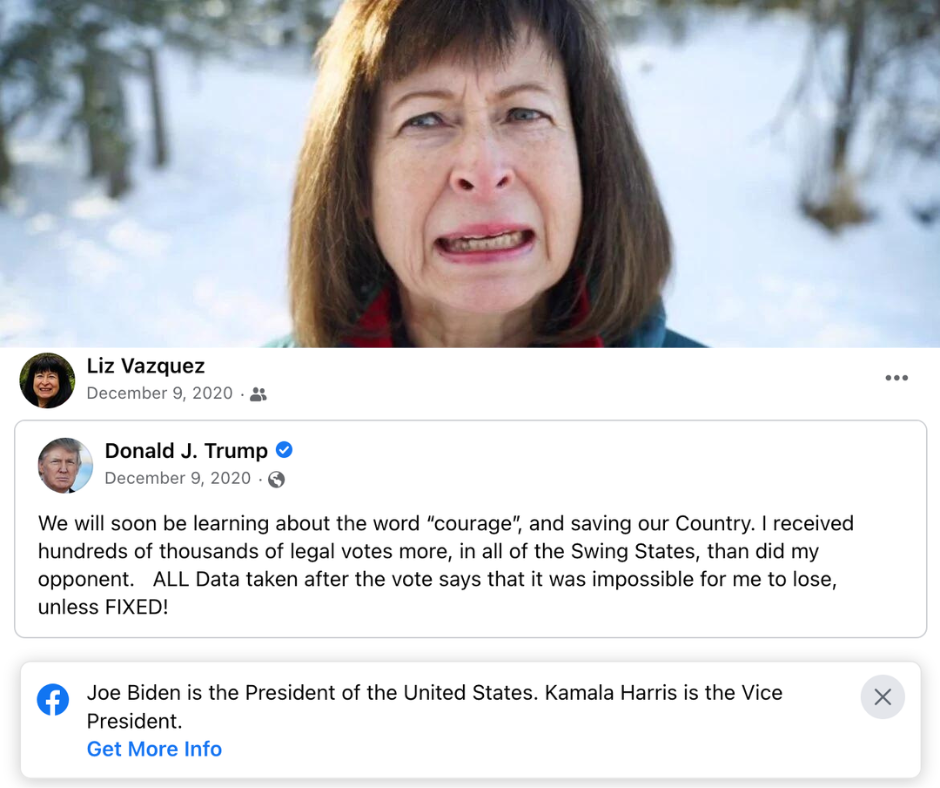 Kinda sad though that Facebook had to attach a note to the post reminding everyone that Joe Biden won as a result of a free and fair election!

As a former criminal prosecutor, one might think that Liz would reach conclusions based on facts and evidence, not the wicked unhinged lies spewed by a raging narcissist and alleged nuclear document thief who tried to topple the government, but you’d be wrong!

I guess the question is whether Liz still believes these lies, but given the evasive answer she gave the ADN in March, I’m going with yep. 🚨

Call me crazy, but I don’t think residents of House District 16 want to be represented by someone who takes every crazy, unsubstantiated assertion at face value – or someone who shares content from former State House libertarian candidate Mark Fish that…wait for it…has no basis in fact! 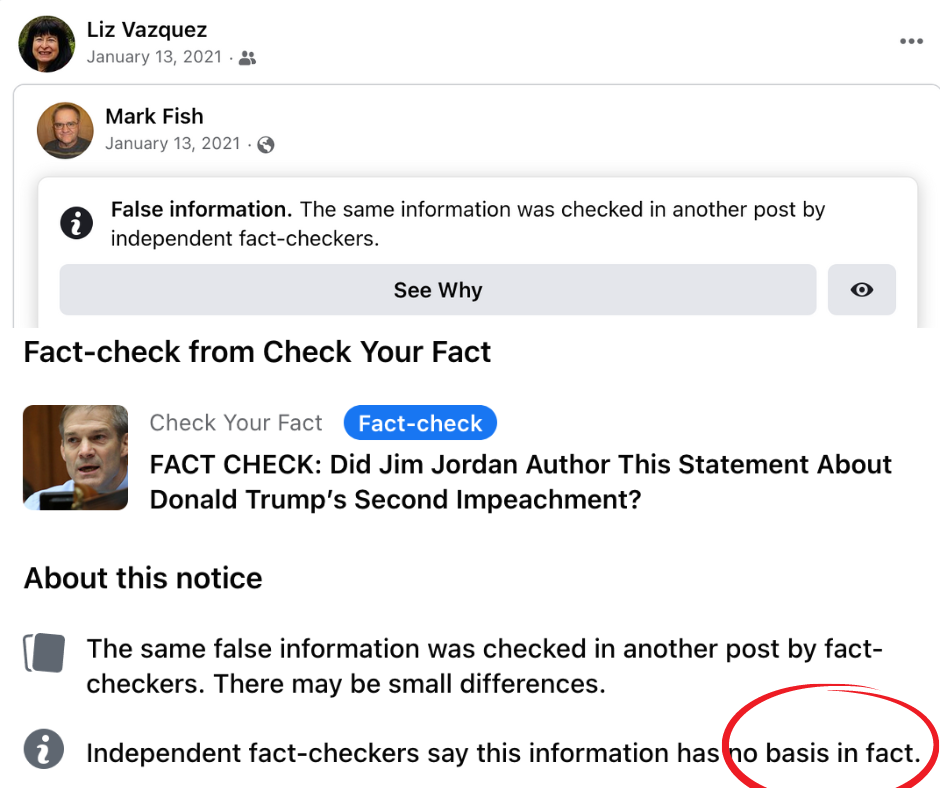 Like the other “Save Anchorage” associated candidates, Liz is too extreme and can’t be trusted.

Jennie Armstrong believes Alaska benefits from strong unions and will work tirelessly to protect your voting rights and access to reproductive health care. Vote for Jennie so she can get to Juneau and begin doing the critical work Alaskans need her to do.

Hiding kind of makes sense – especially if you’re taking your cues from Gov. Dunleavy, who doesn’t show up for debates and appears to be sneaking through backdoors to duck reporters! 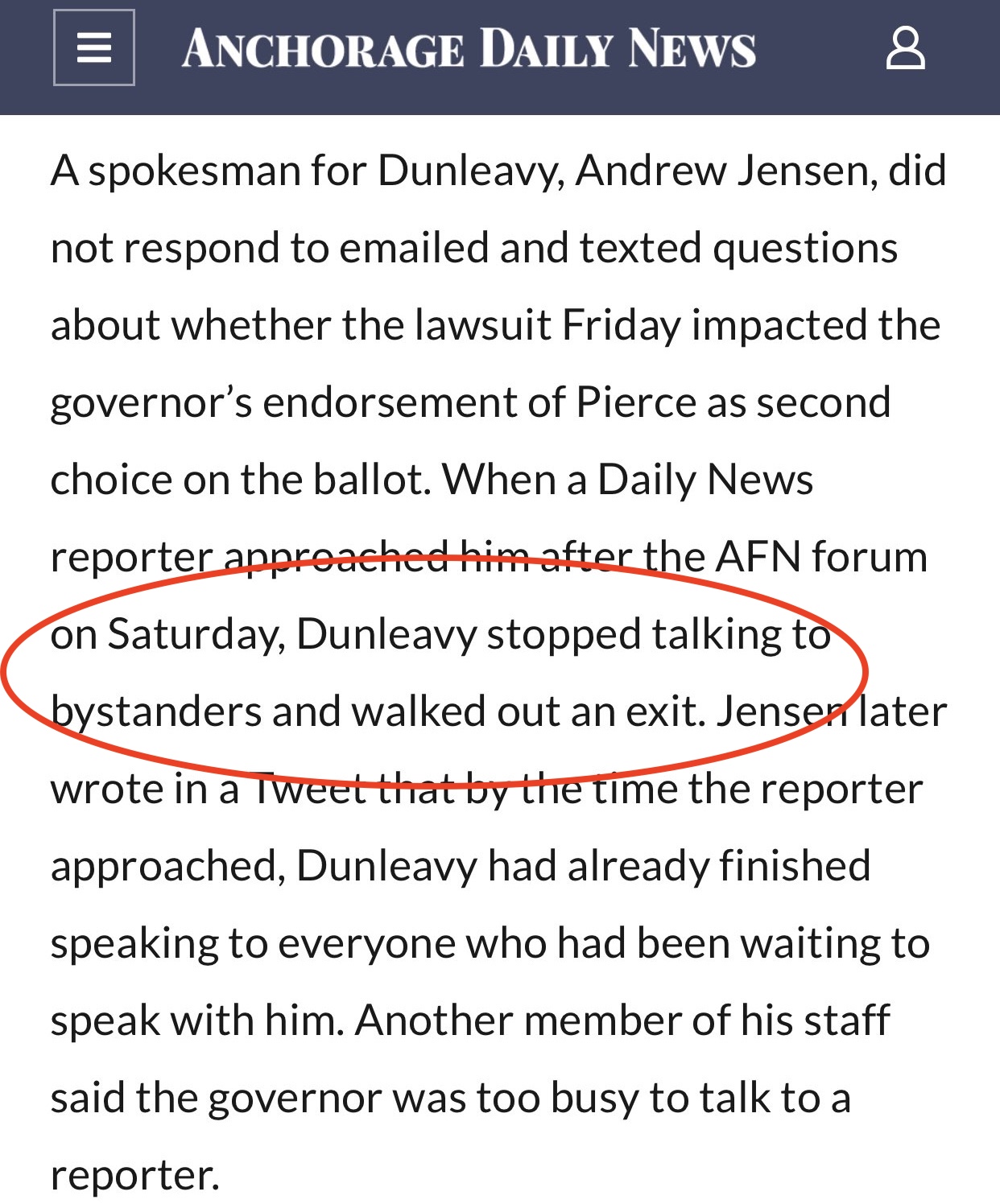 It takes a certain kind of something to run for political office and then dodge the public and the press! Hold them ALL accountable on November 8!

Rep. Laddie Shaw was perhaps the rare example of a candidate happy to publicly embrace their extremism when he locked shoulders with Alaska’s defender of Nazi terminology, Jamie Allard! Birds of a feather? You be the judge. 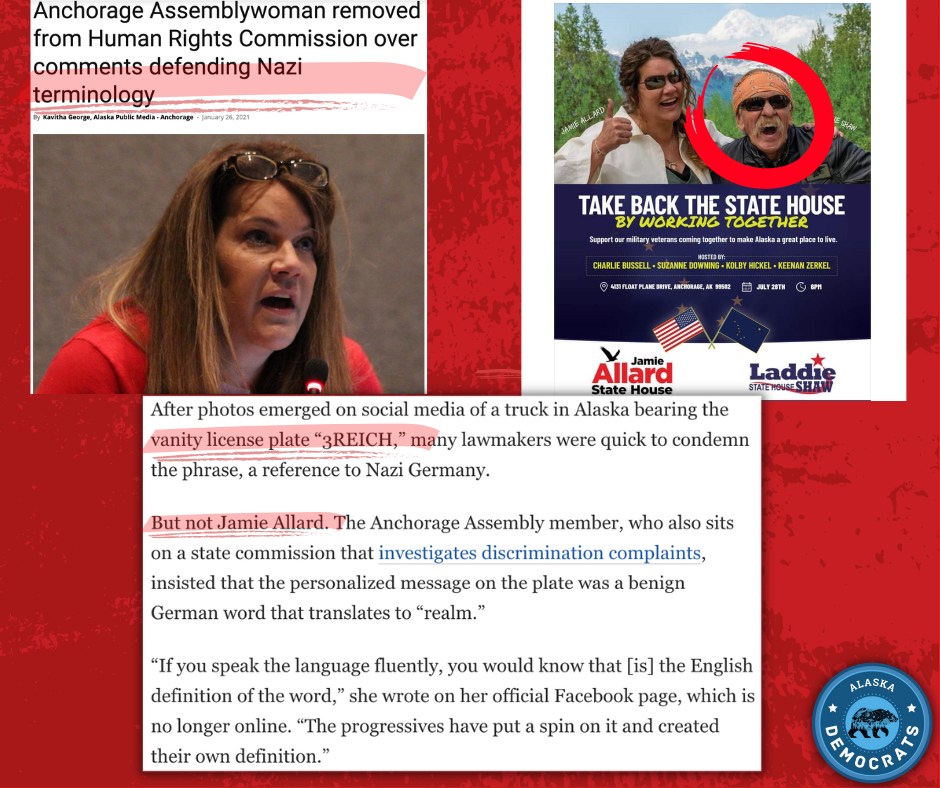 And who could ever forget that time in 2019 when Shaw played hooky in Wasilla while the legislature tried to override Dunleavy’s catastrophic vetoes? I see some far-right Republicans in there…can you find them all? Birds of a feather? You be the judge.

Democrat David Schaff is running against Shaw in House District 9. A vote for David is for public education, bipartisan cooperation, pro-worker policies, abortion rights, and economic development. Let’s get him working in Juneau!

Rep. David “Do nothing” Nelson is another extreme Alaska Republican hiding from voters. There’s not a lot happening on his legislative page, but interestingly, Kathy Henslee (whose claim to fame is being listed in the Insurrection Index) appears to be a big fan!

For a while, I thought maybe I’d lost sight of all the great work Nelson has done for his constituents, but he doesn’t list any accomplishments on his campaign website – just a rather insane/shocking statement touting his “respected support” from the Alaska Family Council “organization” designed to raise money to influence legislators into supporting socially regressive and bigoted politics.

Yep, you read that right…Nelson is proud of his association with the far-right Alaska Family Council, but don’t take my word for it. ⬇️

If you live in State House District 18, you have two great candidates to rank: Cliff Groh and Lyn Franks. If voters turn out and rank them #1 AND #2, a Democrat can win, cast placeholder Rep. Nelson far from Juneau, and get some actual work done! RANK BOTH!

State House District 21 candidate Donna Mears saw more than 40 community members turn out on Saturday to talk with her about school funding, proposed school closures, and what it all might mean for the future. We will need strong leadership to end the education crisis caused by Governor Dunleavy and his right-wing minions, and Donna is that leader! 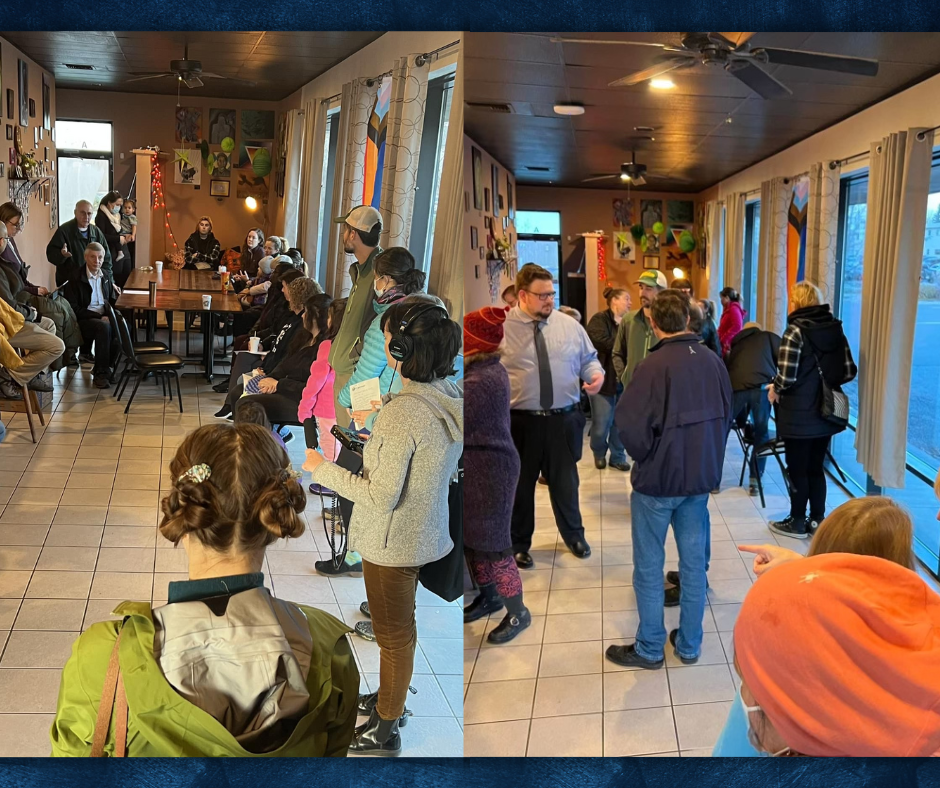 Donna’s opponent, “Save Anchorage” member Forrest Wolfe, has spent a lot of time trying to convince voters he had strong ties (lolz) to East Anchorage, but it’s all a farce. In reality, he’s just another empty Republican suit with little interest in doing anything more than carrying out Dunleavy’s radical extreme agenda.

Donna has shown up for East Anchorage for 20+ years – let’s turn out the vote, reject Dunleavy’s empty suit and get her working for Alaskans! BTW, if you haven’t seen Donna’s endorsement list…check it out. It’s lengthy!

Alaska is one of four states with zero out LGBTQ state lawmakers. Both Andrew and Jennie were featured in an NBC News article about candidates who could make history in November! Let’s make some history!
Reminders!

You still have time to request an absentee ballot – no reason needed! Your application must be submitted by October 29. Just remember to have a witness sign your ballot, fill in the required identifying information, sign, date, and do this ⬇️ before mailing your voted ballot back! 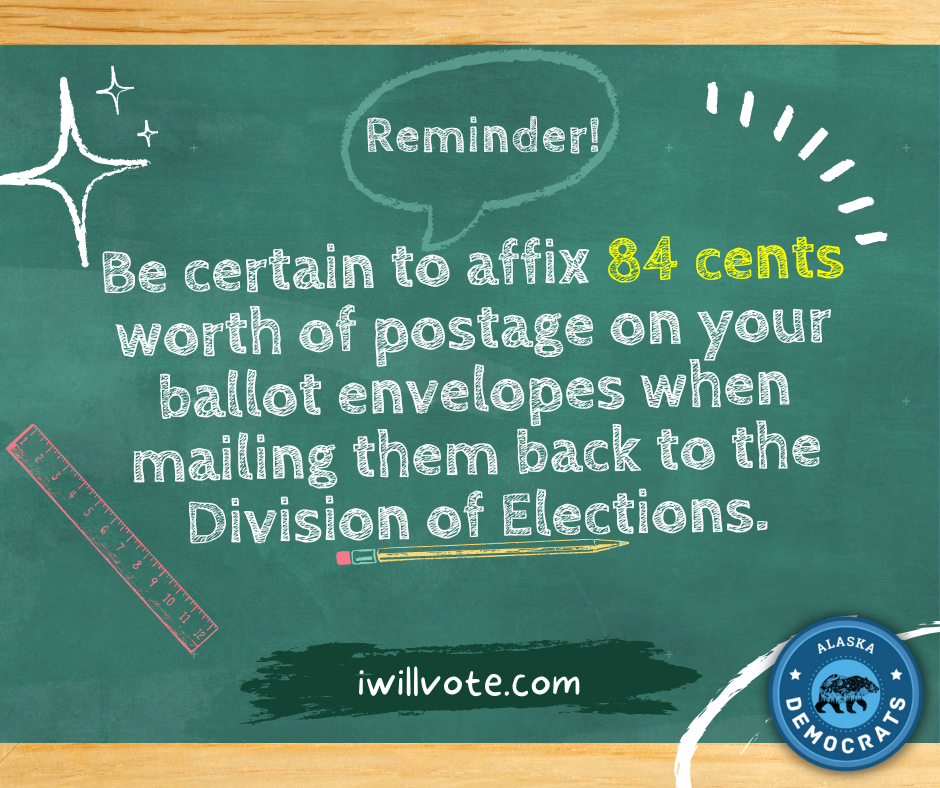 If mail isn’t your thing, you can drop off your voted ballot at any Division of Elections office, an Early or Absentee In-Person Voting Location, or an Election Day Polling Place on or by November 8.

With over two decades of experience working as an Alaska educator, Maxine Dibert KNOWS education. Save the date and support her on October 27 so she can fight for our children in Juneau! 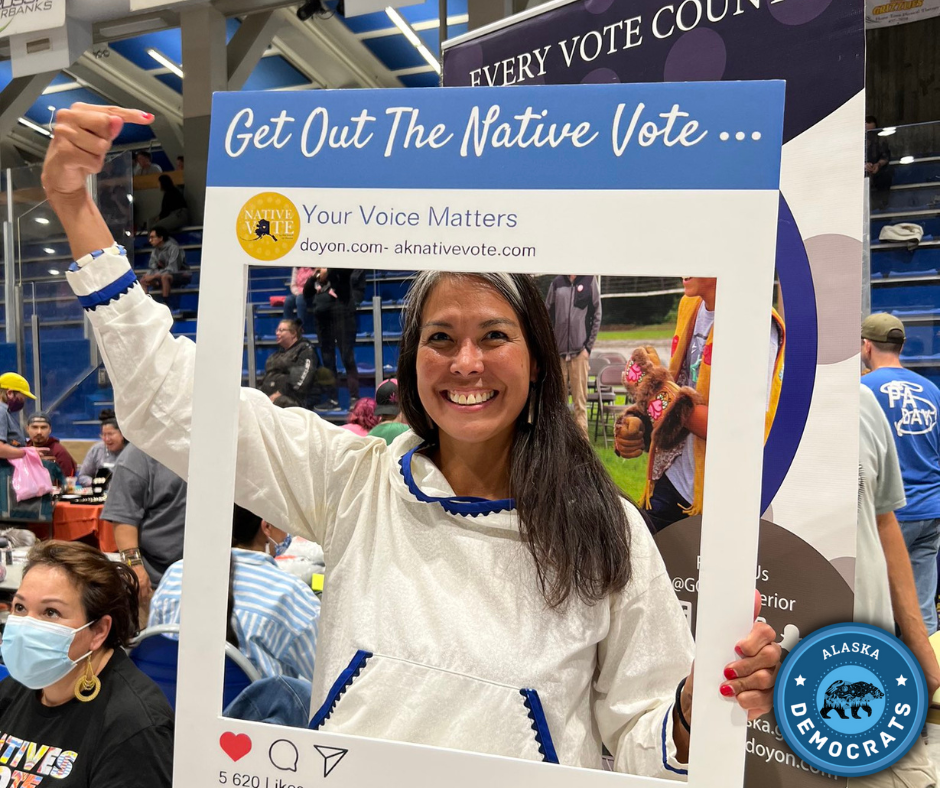 Another way you can help elect Democrats like Congresswoman Mary Peltola and Maxine Dibert is to get involved in our Statewide Get Out The Vote Events! Please share these three remaining GOTV opportunities with your friends, family, and other potential volunteers, and help us elect Democrats up and down the ticket in November! 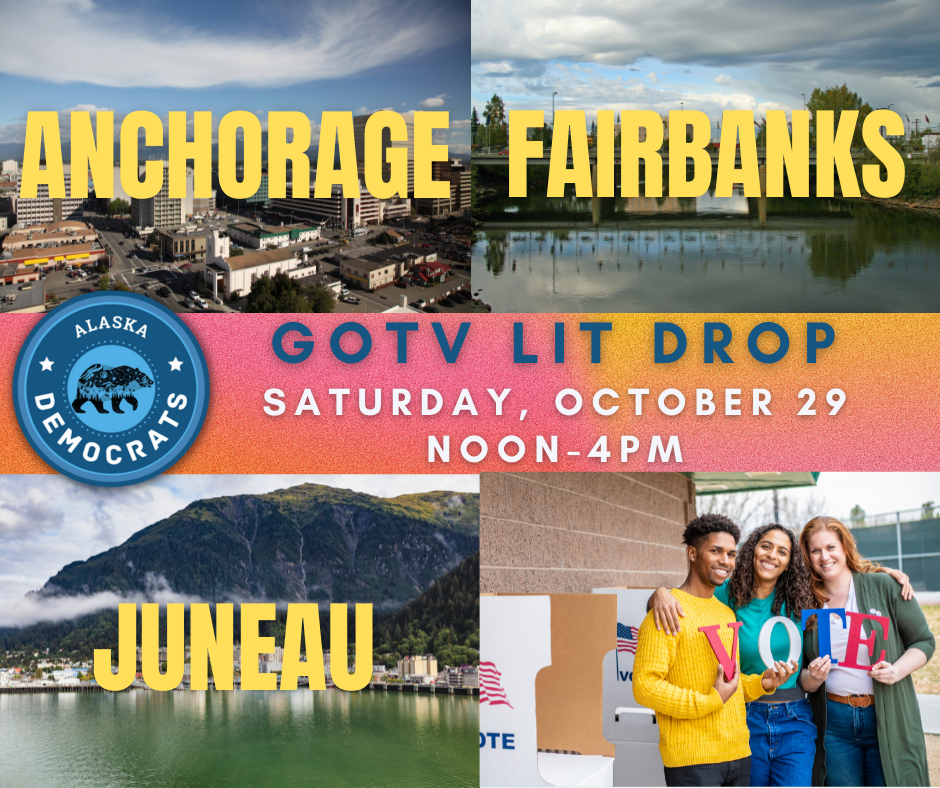 
That’s it for now! Remember, to help us do what we do at a time when it’s evident that it needs to be done, click HERE to support ADP once, or become a monthly donor!