For too long, the far-right elements of Alaska have spread a lie that has slowly but surely permeated social media connections and given rise in our conversations with others. The lie, at its most basic, says that the word Democrat is a dirty word, but in my opinion, nothing could be further from the truth.

The Alaska MAGA Party, having cheered the violent and deadly events of January 6 is now working overtime to paint Democrats and Progressives as pedophilic child groomers as a tactic to distract us from remembering that extremists had referred to the insurrection attempt as “mostly peaceful,” and that they had asserted that any violent acts committed that day were perpetrated by “Antifa.”

In reality, and as the January 6 Committee hearings have shown, it was a violent mob of Trump supporters seeking to topple our democracy that attacked the U.S. Capitol.

Across Alaska, Republicans actively seek to censor material from public and school libraries under the guise of wanting to protect children—part of another rising right-wing coup to subvert local and state governments as an effort to control teachers and impose an ideologically skewed picture of what students should learn about America’s culture and history.

So, when candidates tell you who they are…listen

Alaska Republicans like Kathy Henslee are very comfortable showing us how proud they are of their MAGA extremist beliefs. A year and a month after Trump’s coup attempt, there’s House District 13 candidate Henslee at Mar-a-Lago rubbing elbows with members of the Insurrectionist in Chief’s family. 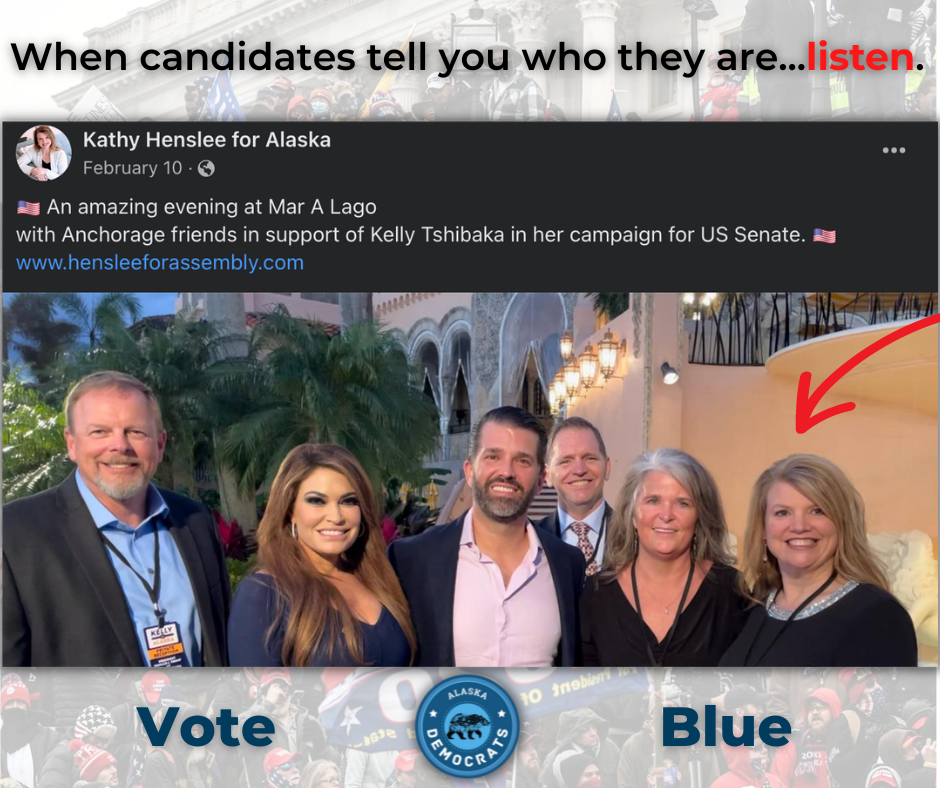 Henslee lost to Democrat Chris Tuck when she ran for state house in 2020. Undaunted and intent on keeping her losing streak going, Henslee ran for Anchorage Assembly last year and lost to Meg Zaletel by 5.1 points. Still super eager to put her extremist viewpoints to work for the right-wing radicals who support her, Henslee filed to run this year in newly minted House District 13 against Democrat Rep. Andy Josephson.

Henslee has been a member of the far-right Save Anchorage Facebook group for close to two years. She’s also a member of two other extreme groups: anti-mask/COVID-19 misinformation group Alaskans for Children’s Right to Breathe and Alaska Parents’ Right in Education, an “organization” dedicated to anti-LGBT causes, and which pushes the far-right’s grotesque groomer narrative.

“I believe the events on January 6th in the U.S. Capitol have been exaggerated
and misrepresented by the media and the left.”

It looks like Henslee really believes what she says and appears to have bought into Donald Trump’s “Big Lie” because here she is attending the Anchorage Trump rally! ⬇️ 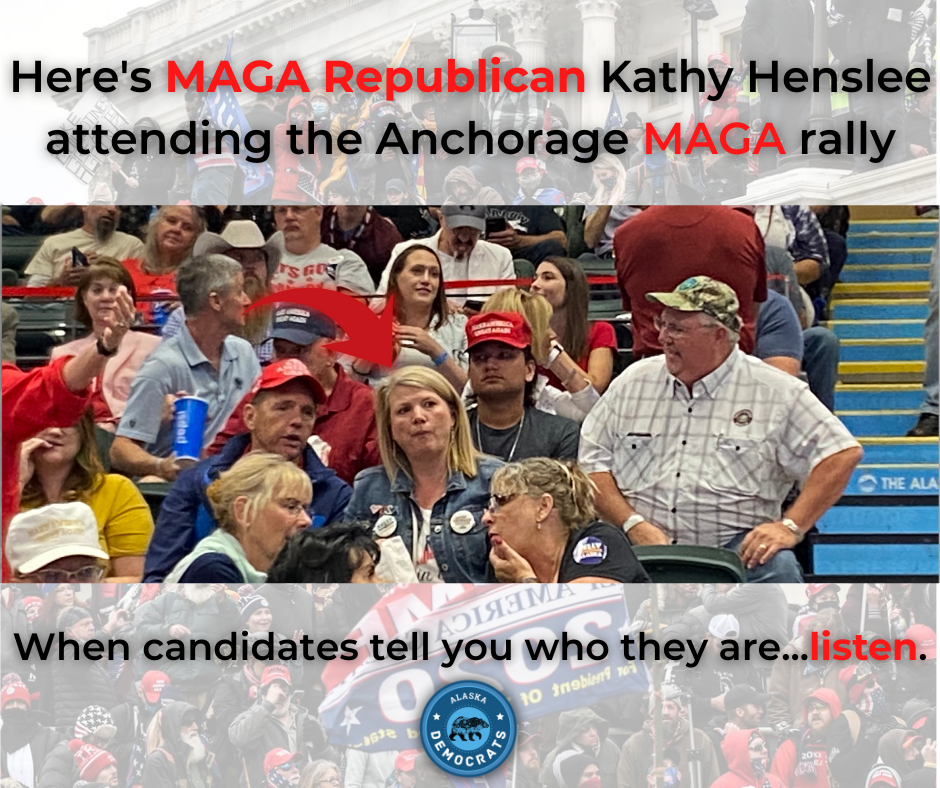 Former Chair of the Texas Republican party Allen West was in Alaska last July. For those unaware, West and two other Texas GOP officials took part in a Dallas conference in May 2021. The event had ties to the QAnon conspiracy theory movement. Marketing for the conference included a logo highlighting a cowboy hat with the letters “WWG1WGA” around its band, a known QAnon motto. (It was the same conference where former disgraced Trump administration official Michael Flynn advocated for a military coup on the U.S. government, but that is a whole separate Blue Alaska).

During his time in Congress, West was known for stirring up buckets of controversy with incendiary comments about Islam, descriptions of President Barack Obama as a “low-level Socialist agitator,” and unfounded accusations that 81 Democratic members of Congress were members of the Communist Party. (Sounds like an Anchorage Assembly meeting!)

Anyway, the alluring stench of right-wing extremism emanating from West must have been quite appealing because he and Henslee did the photo thing when he was in town last year. 10/10 yikes! 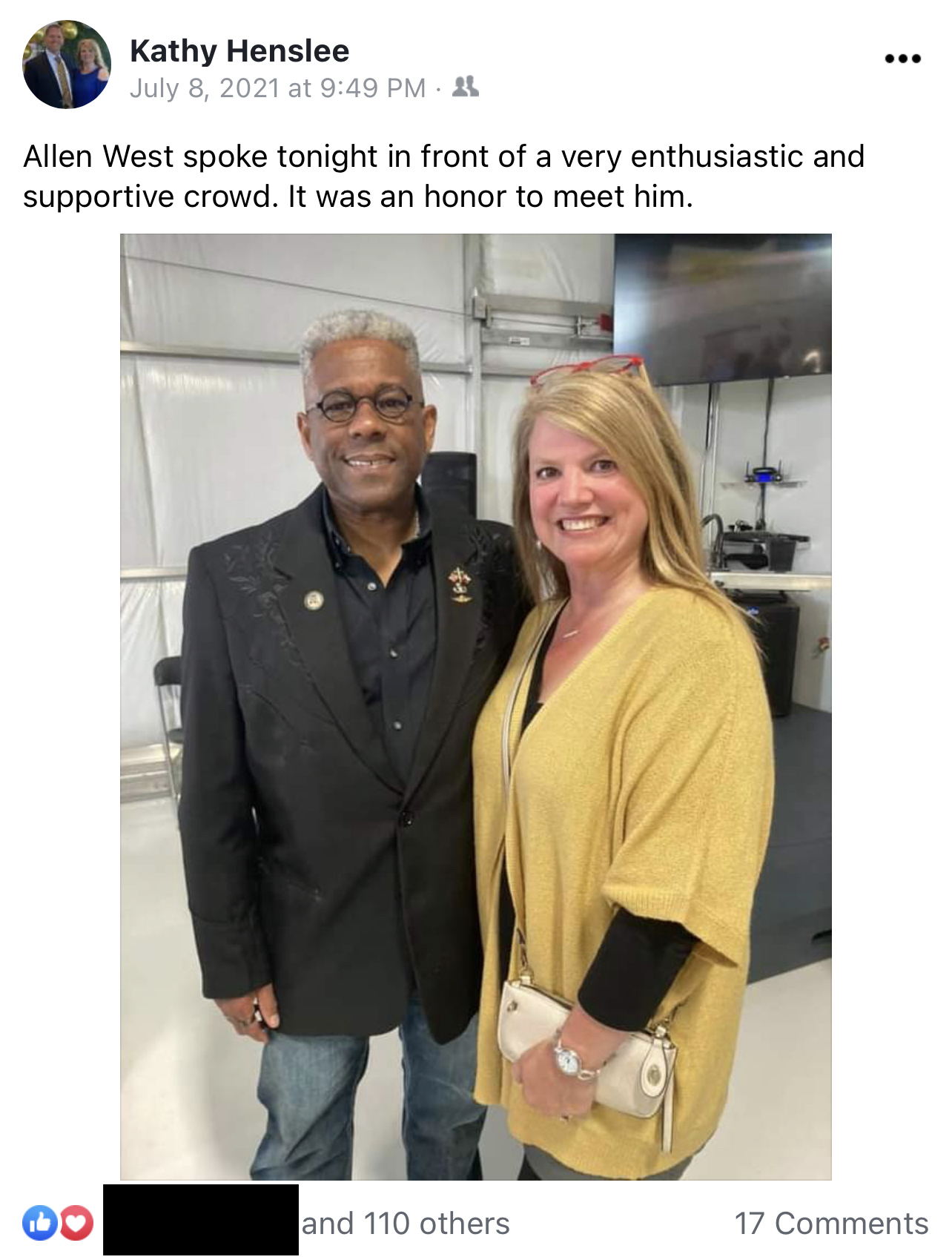 I sure do hope Democrats, progressives and moderates turn out the vote in this district because having what would amount to TWO Jamie Allard’s in the legislature is simply no good at all.

Wouldn’t we rather re-elect Rep. Josephson to that district? He’s more interested in continuing to put Alaskans first and less interested in furthering the far right’s dangerous agenda.

If the far-right can be comfortable in their own skin while whitewashing a coup attempt, we can and should be comfortable as Democrats, working to make a better way of life for all Alaskans. 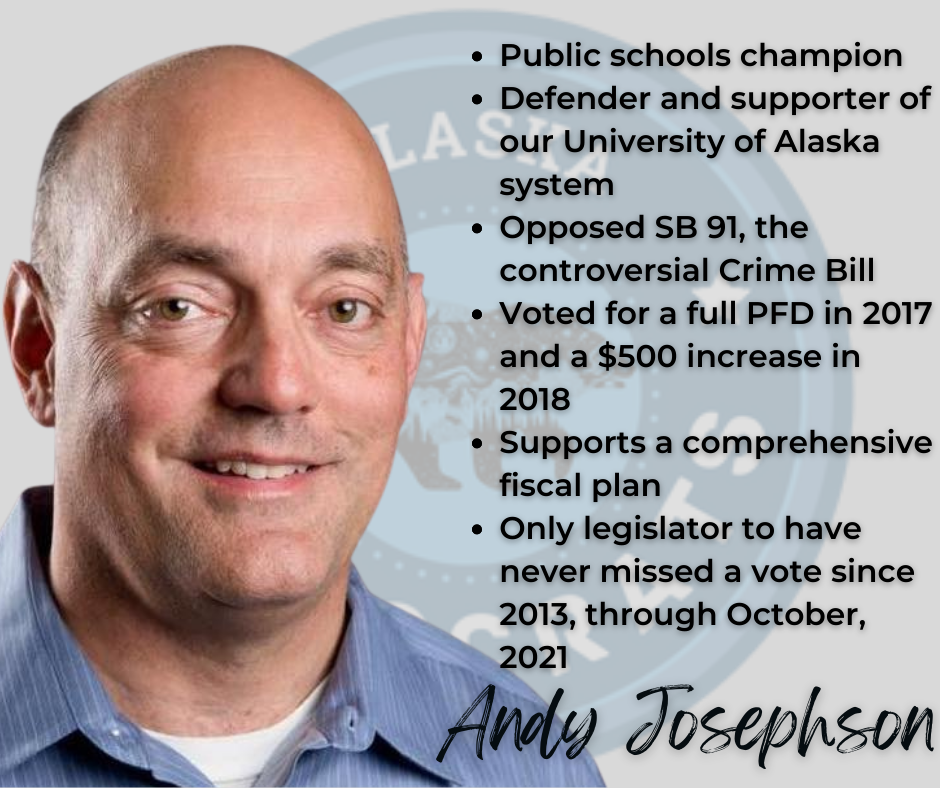 Storming social media (not the Capitol)

House District 10 candidate Caroline Storm (get it? Storm? Storming? 🙃) has been out all week knocking on those doors! To be perfectly honest I’m not a huge fan of the rain and its accompanying dreariness, but Caroline isn’t going to let a little rain stop her from getting the word out about what she would bring to the legislature if elected! Thankfully, she survived the rain and didn’t melt. ⛈ 🌩 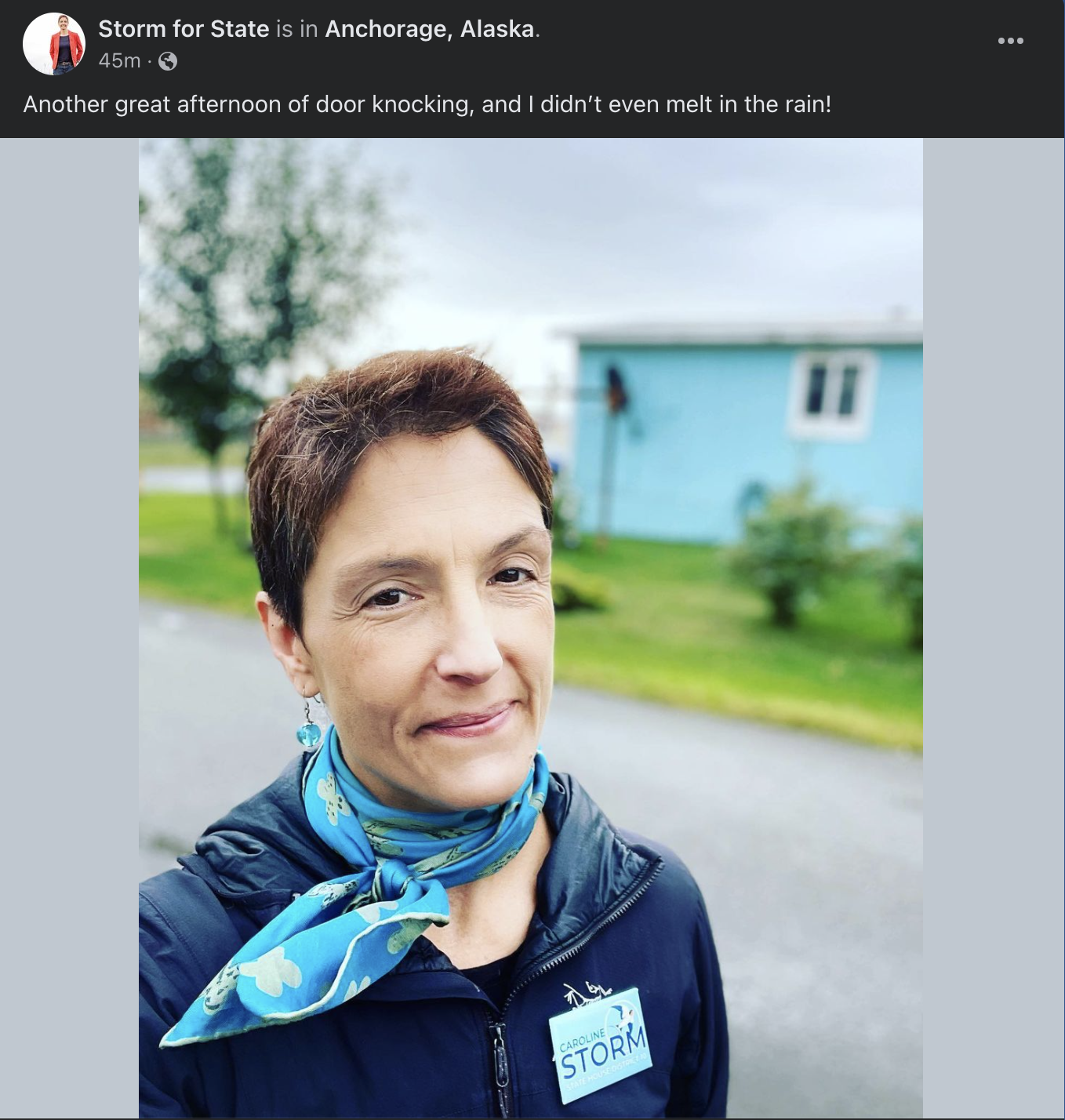 Like most Democratic and progressive candidates running for elected office this year, Caroline is looking to bring focus back to critical issues that matter to Alaskans.

Caroline has already been endorsed by the Anchorage Central Labor Council, APEA-AFT EPIC and NEA-Alaska. 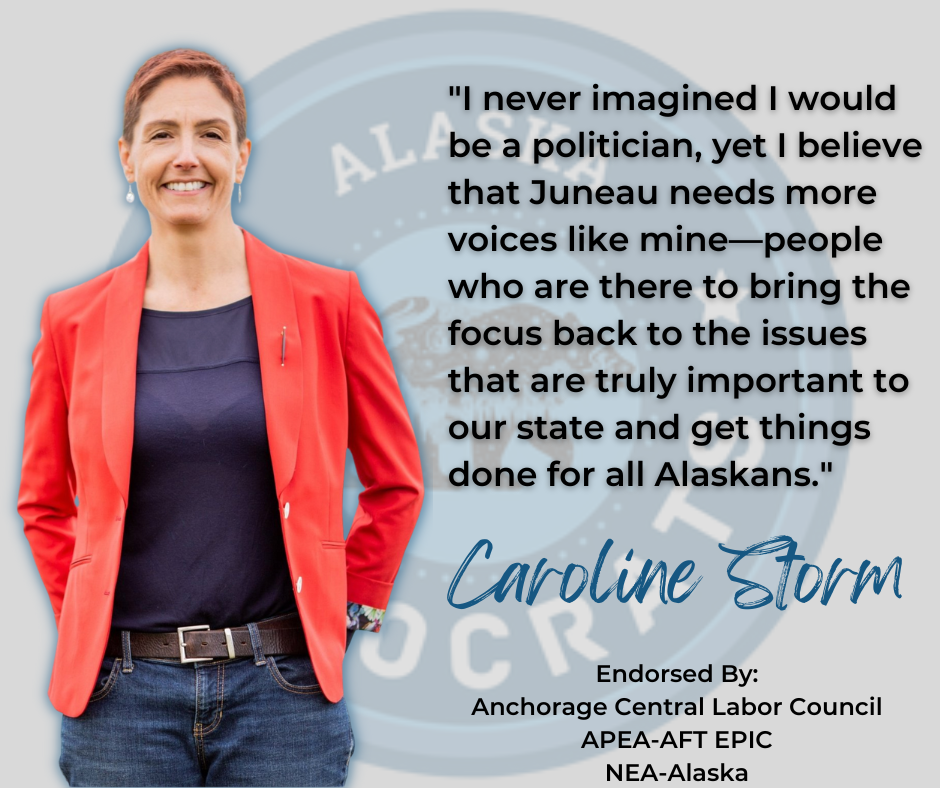 For those who don’t know, House District 10 is a winnable district and presents a prime opportunity to oust Alaska Republican Craig Johnson, who has been endorsed by the far-right conservative group Alaska Family Action (AFA). Johnson is pro-forced birth, supports defunding Planned Parenthood and favors educational choice.

This week, Caroline is holding her campaign kick-off event where she’ll be hosting a traditional South African Braai in honor of her mother. Details about the event can be found at this link and if you can’t attend, give her a follow on Facebook. She would love your support!

Also braving the rain this week was House District 22 candidate Ted Eischeid who posted this photograph to Facebook yesterday captioned with the lyrics to Singin’ in the Rain. 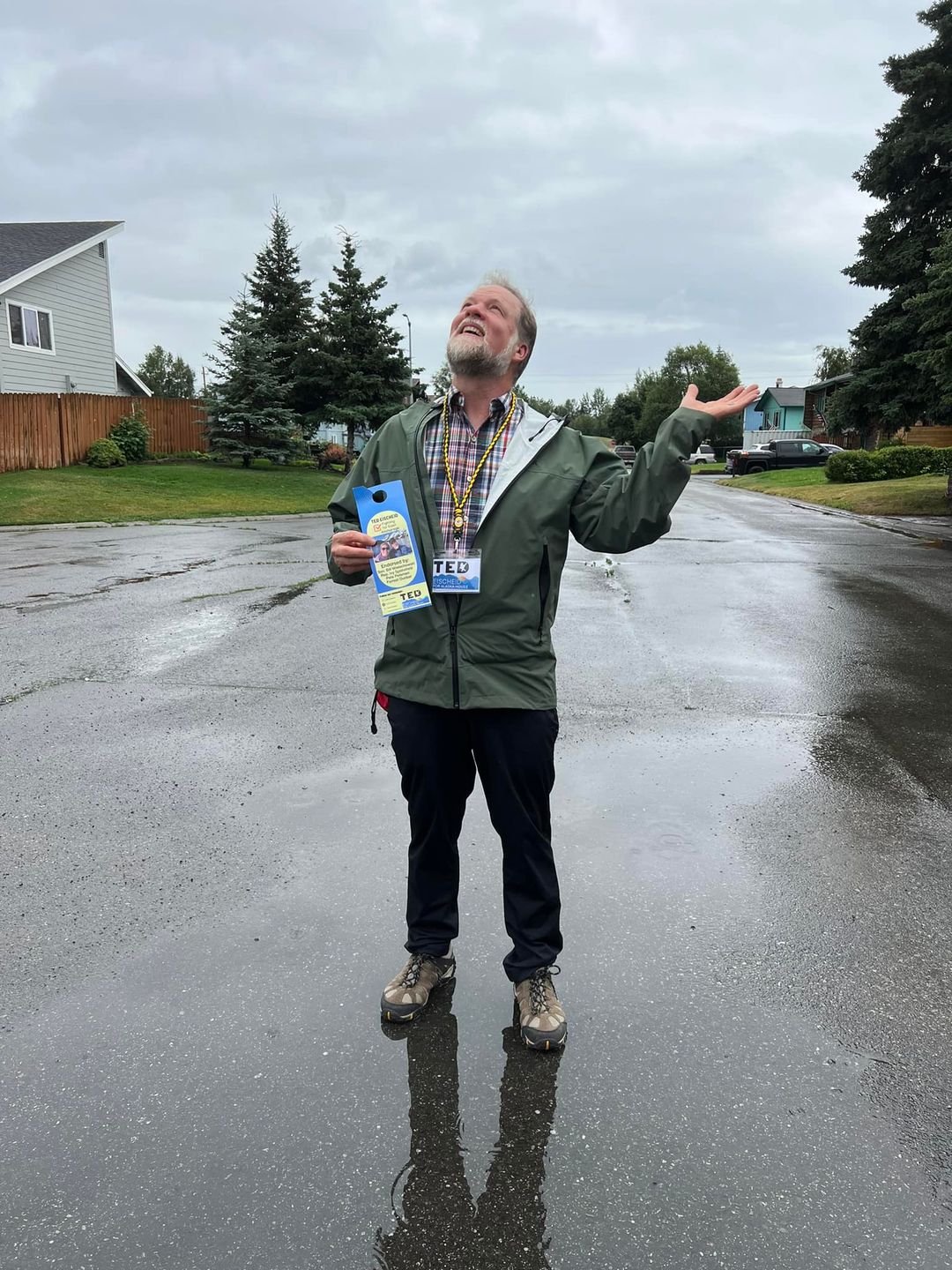 A scientist by trade, Ted supports investing in public education, making improvements to the Port of Alaska and infrastructure. Like Caroline, he’s also carrying around some great endorsements: 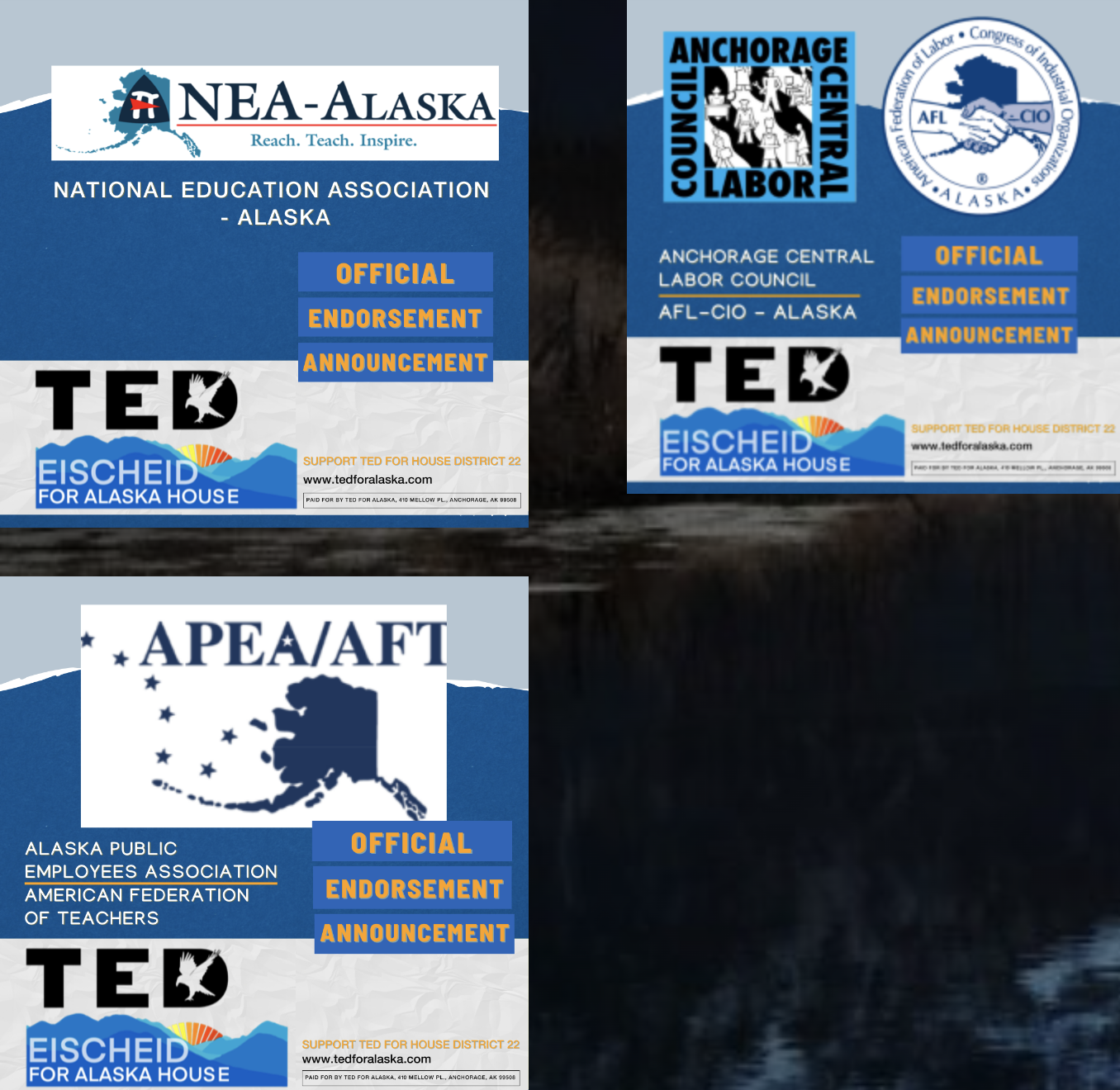 Ted wants to see a return to rational and effective government (we’re here for it). Follow his campaign on Facebook and Twitter and show him some support!

Alaska Senate Democrats sent a letter to MAGA Mike earlier this month urging him to distribute the PFD early. Sen. Kawasaki saw this as necessary to help provide relief to Alaskans feeling the pinch because of inflation and fuel costs.

As you can see, our Trump endorsed Governor was not much moved and Scott was quite disappointed. Dunleavy’s decision to move PFD disbursement up only by a few weeks isn’t at all surprising considering he’s the guy who left Alaskans to fend for themselves while hospitals were being deluged with COVID-19 patients. 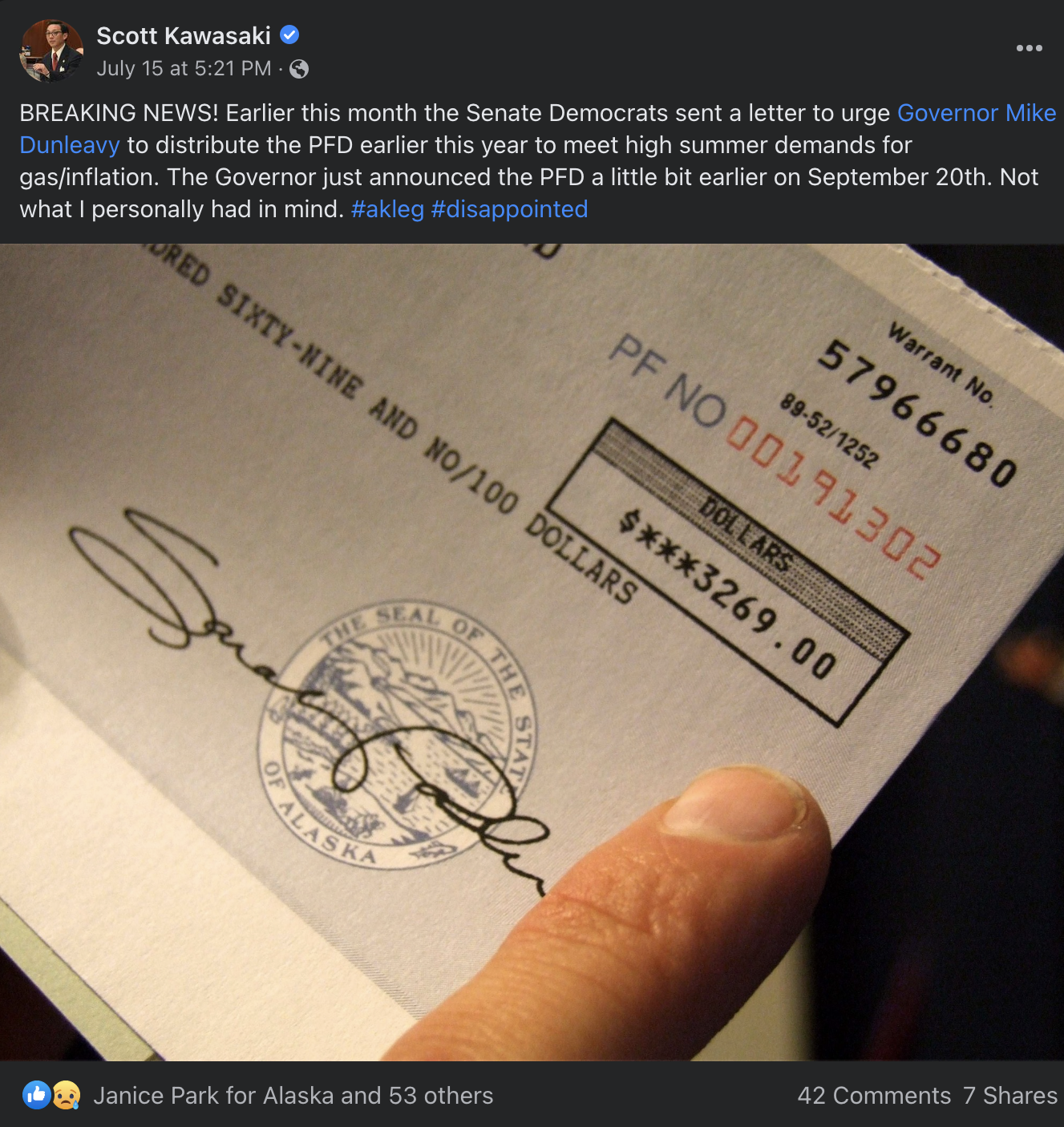 Right Wing Watch unearthed a video of Tshibaka in which she claims God created government and that she has been “sent to the harvest field of government” to spread the Gospel. She also sings a rousing rendition of heads, shoulders, knees & toes. Like Kathy Henslee, Kelly is also a member of the Save Anchorage Facebook group, so the video makes a lot of sense.

While Kelly is busily furthering her version of the politicized gospel, U.S. Senate candidate Pat Chesbro spent time today at Cafecito Bonito in Anchorage, spreading the good news of the Democratic Party and what her candidacy brings to her race.

Don’t be fooled by other candidates. I haven’t seen Lisa Murkowski at any pro-choice events, have you? Lisa HAS NOT earned our 1 vote, Pat has. 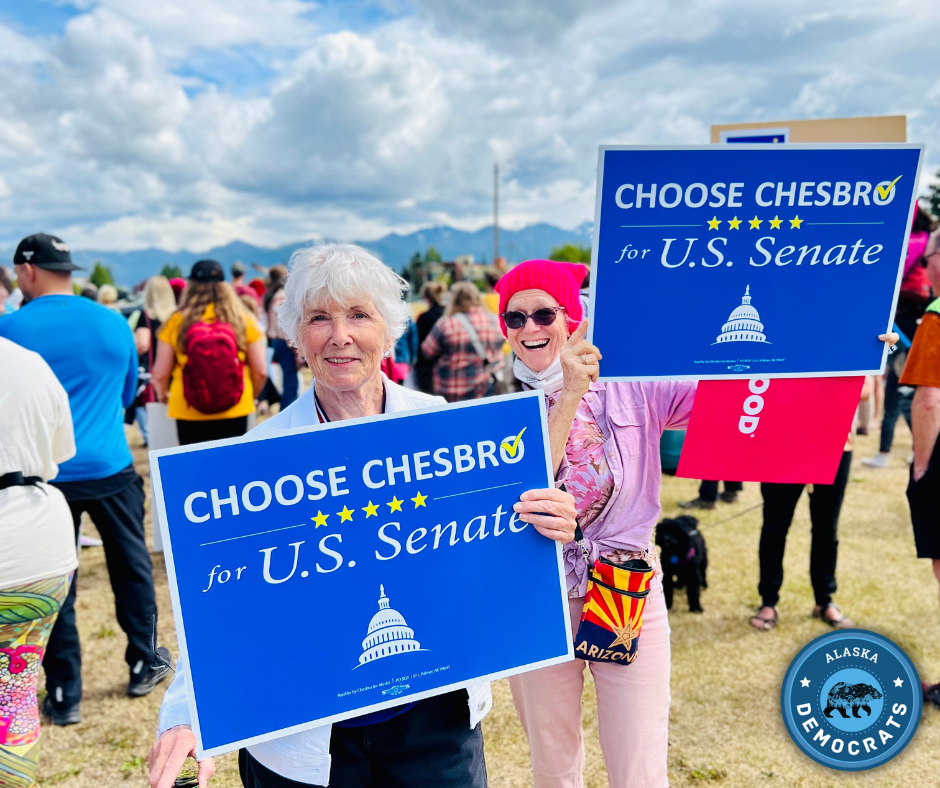 It’s all about Mary

This Thursday, the Black Caucus of the Alaska Democratic Party is hosting a rally and meet & greet with Democratic candidate for U.S. House of Representatives Mary Peltola! That’s right, the Black Caucus is back and hitting the ground running with what’s shaping up to be a tremendous event!

➡️ Details about the event can be found here ⬅️

If you’re in Anchorage, show up to support Mary and be sure to get lots and lots of photographs of the event so you can share them widely across social media! #SharingIsCaring 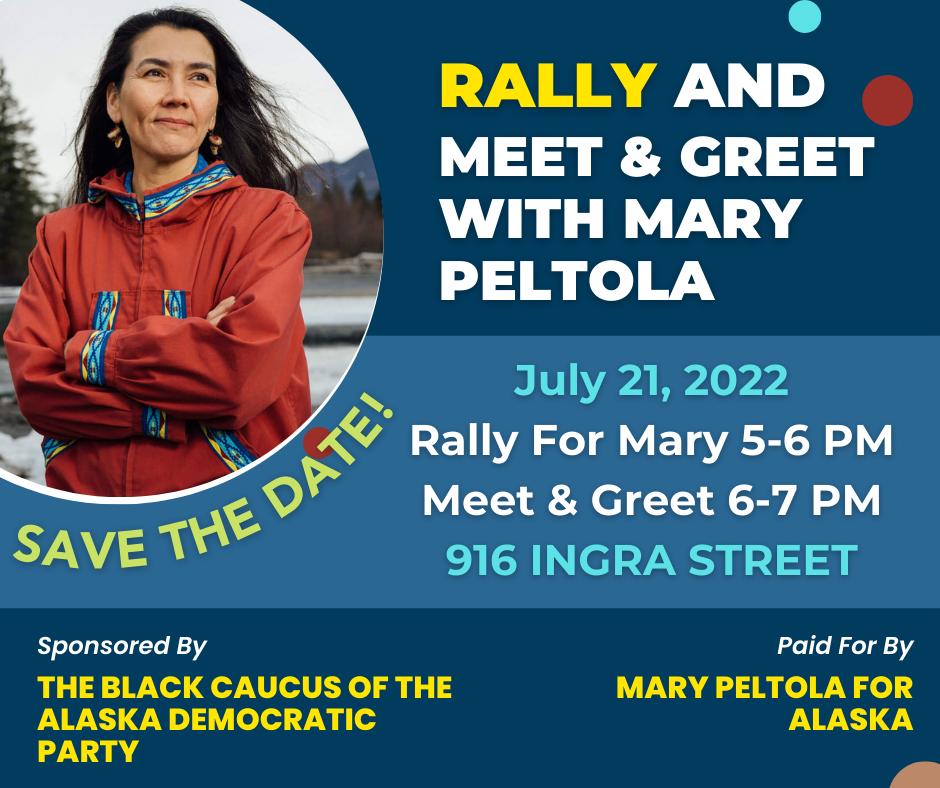 After being separated for a bit—a result of the pro-choice events that were held in Anchorage and Juneau, it’s nice to see Les and Jess back together again and making an appearance at Bear Paw where Gara-Cook supporters marched in the parade, fully adorned in campaign garb. 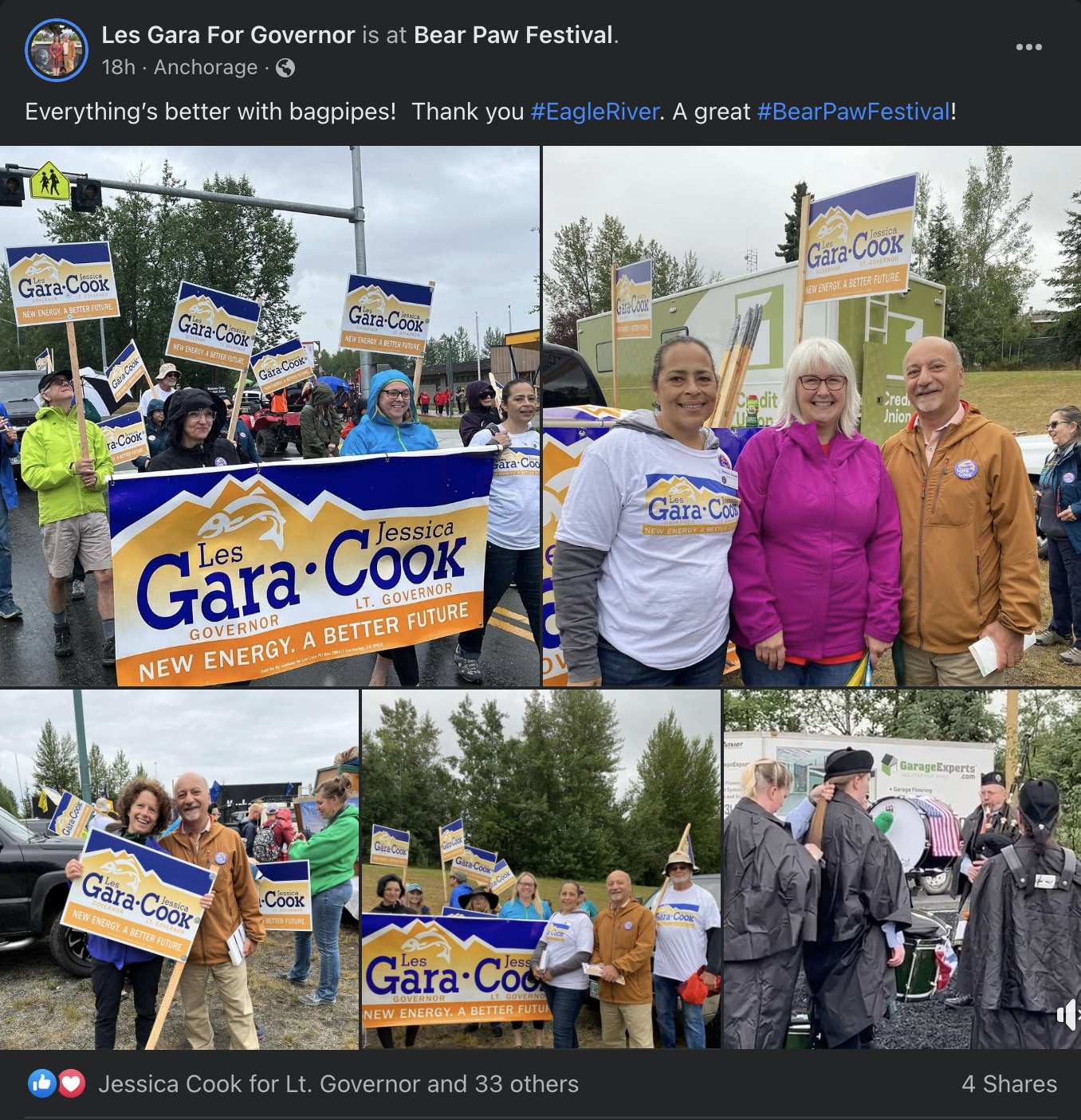 As a Democrat, I have to say I’ve found it perplexing that some are considering ranking former Governor Bill Walker first.

Gara and Walker are friends despite their personal disagreements. For example, he and Walker both worked to adopt Medicaid expansion, which has brought health care and jobs to thousands of Alaskans.

But their personal friendship hasn’t stopped Les from talking about where his friend stands on issues that matter the most right now—especially in light of an out-of- control Supreme Court who struck down Roe—to say nothing of Justice Clarence Thomas signaling that contraception and gay marriage are next on his MAGA chopping block.

In a July 14, 2022, Community Perspective sent to the Fairbanks News Miner, Gara and Cook reminded voters that as Governor, Walker promised he would set aside his “pro-life” beliefs but then turned around and took action to roll back a woman’s right to choose.

In their endorsement of the Gara-Cook ticket, Planned Parenthood Alliance Advocates wrote of Walker:

“Former Governor Walker also showed he cannot be trusted to protect our rights. While in office, Walker had a proven record of supporting anti-abortion policies and politicians, including then-Senator Dunleavy.”

As Les has said, the Gara-Cook ticket should be your one vote in the August 16, 2022, primary. 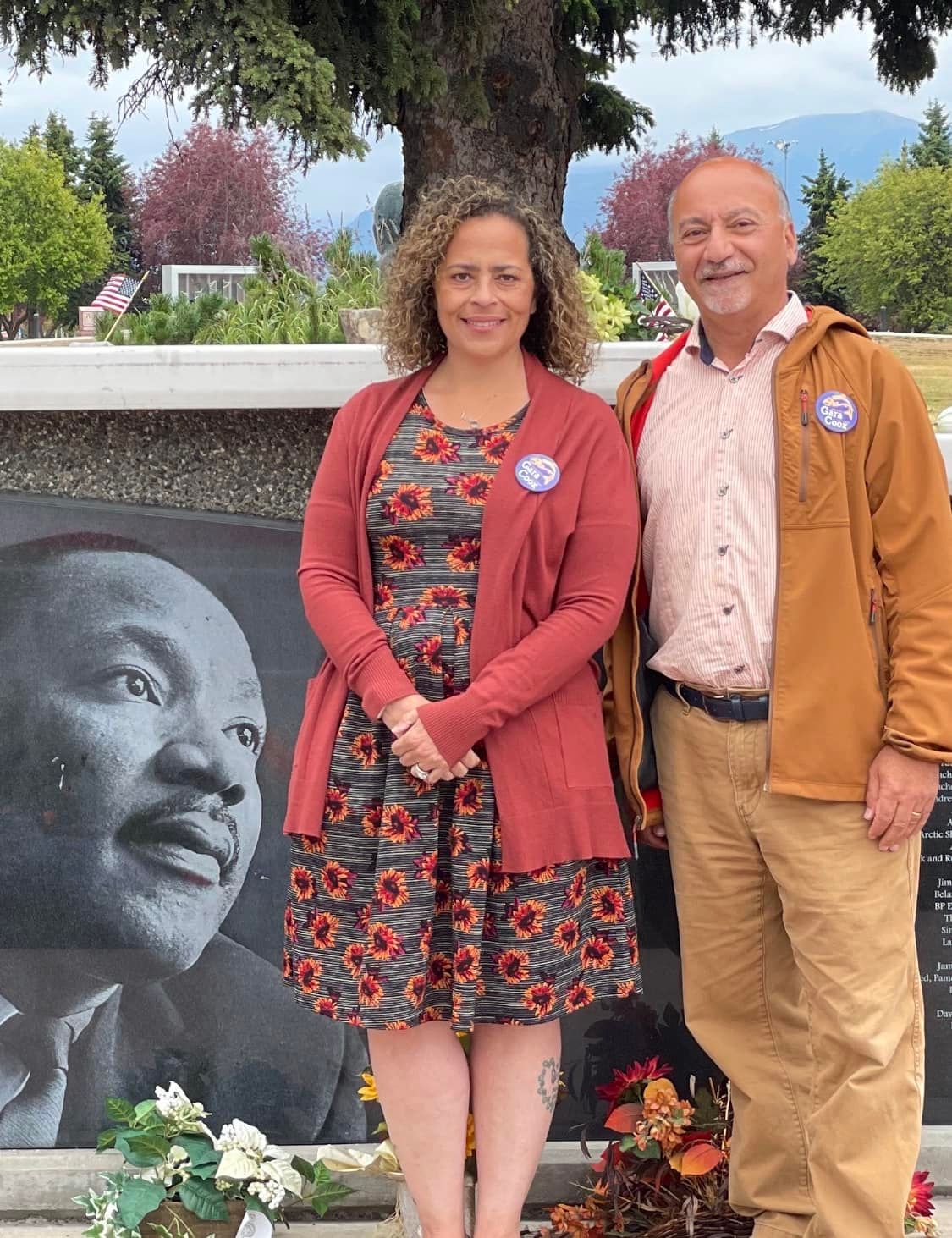 This Saturday from 1-3pm there’s a Zoom Coast to Coast Fundraiser with Jessica Cook. Click here for details and support the only pro-choice ticket in this race!

Work for the greater good!

The Alaska Democratic Party seeks an Organizing Director for this year’s campaign cycle. This position will collaborate with other staff and party leaders in creating and implementing a strategic plan that helps elect Democrats at all levels.