I sat down to write this week’s Blue Alaska at least four different times and each time struggled with the question: “Where the hell do I even begin?” 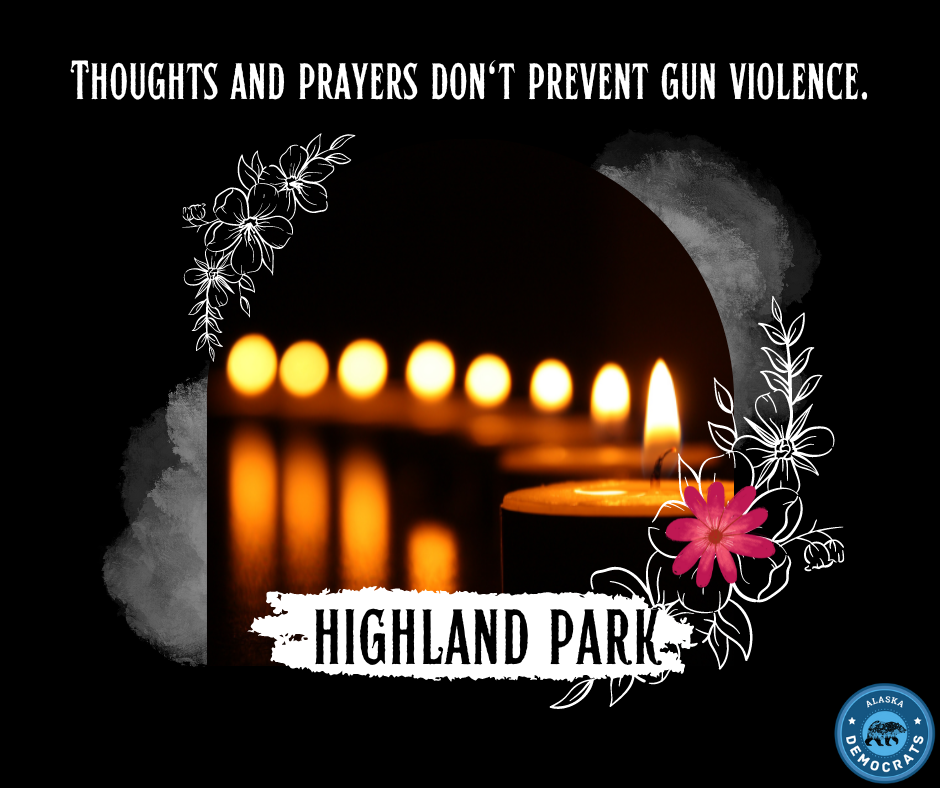 Over the past decade, the Anti-Defamation League has counted about 450 U.S. murders committed by political extremists. Of the 450 killings, right-wing extremists committed about 75% of them.

Our hearts ache and we grieve with those impacted by yet another senseless and tragic act of gun violence which was allegedly carried out by a 22 year-old white male Trump supporter.

The Supreme Court of the United States has had a busy couple of weeks. Not only have they stripped women of their constitutional right to an abortion, they’ve also stripped states of their ability to limit guns in public, done away with bans on prayer in public schools, crippled the EPA from regulating greenhouse gasses at power plants and did away with Tribal sovereignty to protect against state intrusion.

A third of the current Supreme Court was appointed by the guy who is the focus of the January 6 Committee and who lost the popular vote in 2016 by 2,828,686 votes. The result of electing a far-right, narcissistic sociopath? We now have a Supreme Court who has made it clear that they are totally willing—and able—to decimate decades-old established areas of law over just a few months. 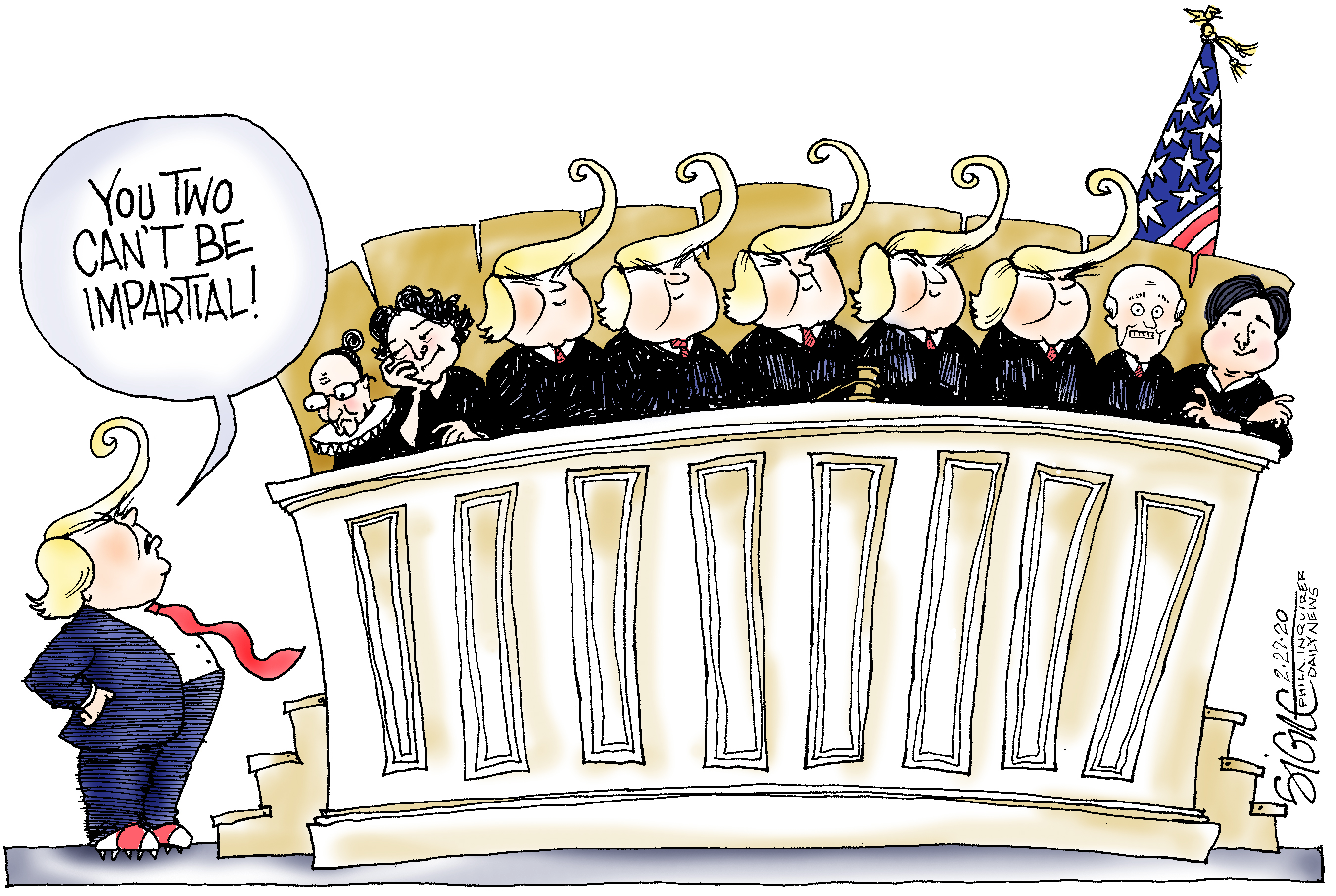 Digest the significance of these recent rulings—the power of the people has shifted to the Supreme Court. It’s not okay.

But the worst is yet to come…

Last week, the Supreme Court agreed to hear a case that could dramatically alter how federal elections are conducted. Front and center is a legal theory that would give state legislatures authority to set rules for federal elections, free of supervision by state courts AND state constitutions.

The “independent state legislature theory” stems from the election clause in Article I of the Constitution which says, “The times, places and manner of holding elections for senators and representatives, shall be prescribed in each state by the legislature thereof.”

Proponents of the theory argue that the clause gives state legislatures power to regulate federal elections uninhibited by 🚨state courts or state constitutions.🚨 If a majority of the Supreme Court agrees (and nothing is off the table, it seems), the resulting order would cripple state courts, removing their judicial oversight of state elections.

If you’re wondering where this legal theory originated, look no further than the three Supreme Court Justices who first invoked it in Bush v. Gore — the case that handed the 2000 election victory to George W. Bush.

But wait, the story gets better—Trump advocates attempted to use the theory in Arizona as a way to call for the decertification of the state’s electors in the 2020 presidential election. Who among those advocates was seeking decertification? Well, Virginia Thomas, of course, wife of Justice Clarence Thomas.

Let that soak in as you ponder the importance of voting in this year’s elections.

SCOTUSblog has an excellent explainer about the case (Moore v. Harper) and its implications.

🎶MAGA Claus is coming, to town🎵

Yep, it’s happening. The un-jolliest orange MAGA Claus of them all is coming to Anchorage on Saturday July 9th to stump for MAGA Mike, The Quitter, and Kelly the Tongue Speaker—(accurate sentence). 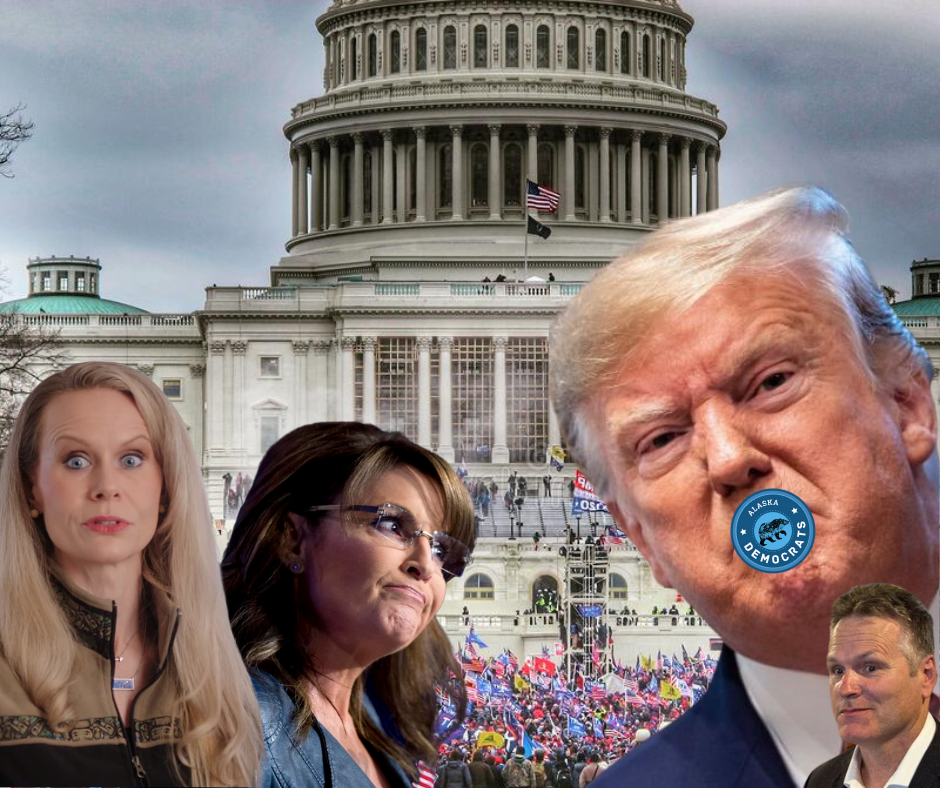 Not sure what else can be said ahead of the event, but I think it’s safe to say we can expect a lot of bloviating and lying from the guy who baited his army of cult followers to storm the U.S. Capitol. Let’s just hope he doesn’t encourage rally attendees to storm the Anchorage Assembly Chamber, as members of a certain far-right Anchorage-based Facebook group have suggested in the past. 👀

Does anyone know how much it costs to be photographed with the guy who tried to dismantle democracy? I bet Kelly and far-right state house candidate Jamie Allard know! 👎🏼

The only real question is whether Gov. Dunleavy is going to make an appearance at the event. I guess it’s a possibility because “additional special guests” will apparently be announced at some point. 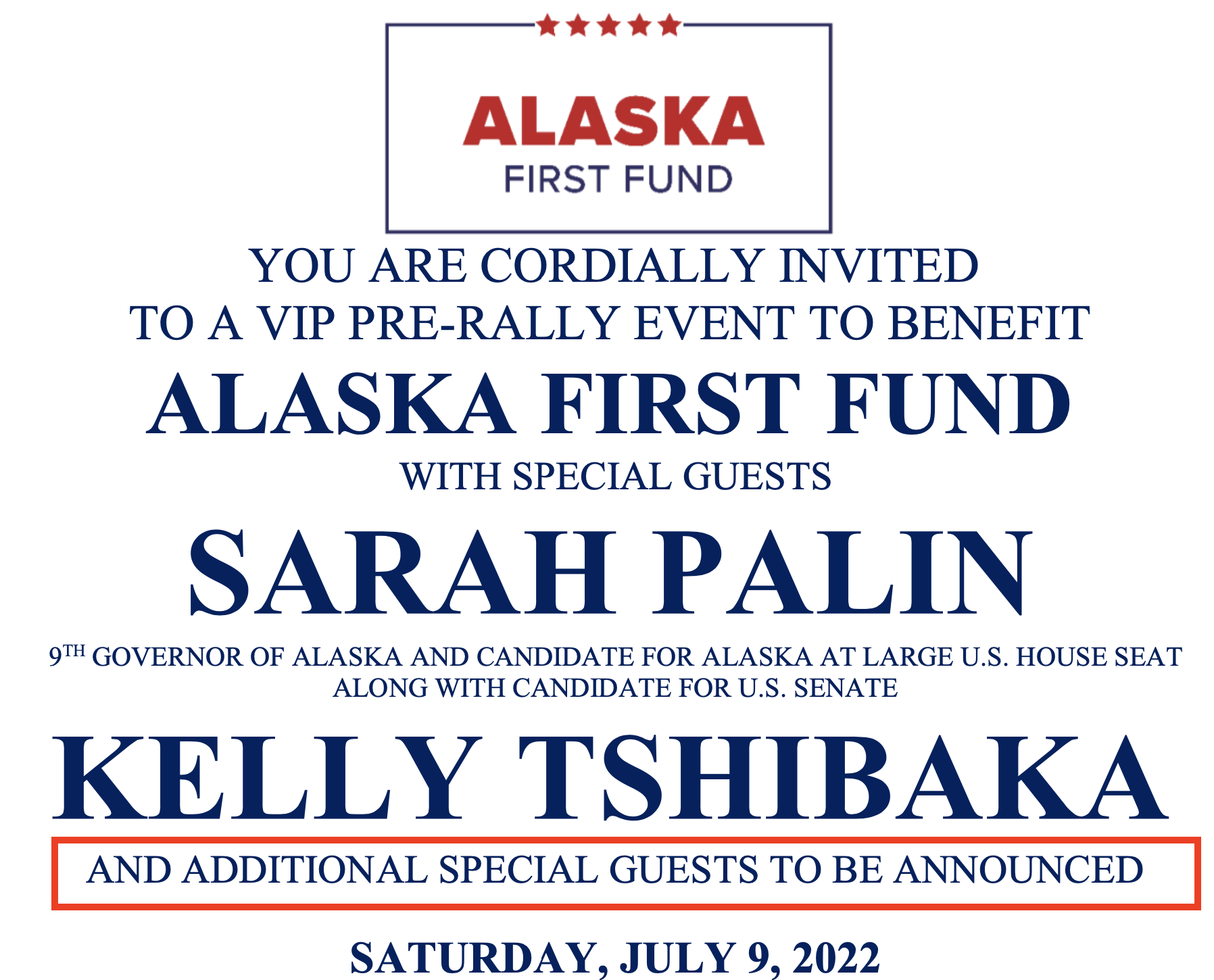 If you’re looking for something to do the same day the Insurrectionist in Chief is in town, consider attending more meaningful events such as pro-choice rallies.

GOP Rep. Kurka (whose running-mate is the guy who was in D.C. on January 6, 2021) appears to have suggested that for a “generous donation,” you can smash those wildly reliable and accurate Dominion Voting Machines at an event in Wasilla of all places. (After you’ve worked up an appetite smashing receptacles of democracy, replenish your strength by taking advantage of the 🌮 Bar). 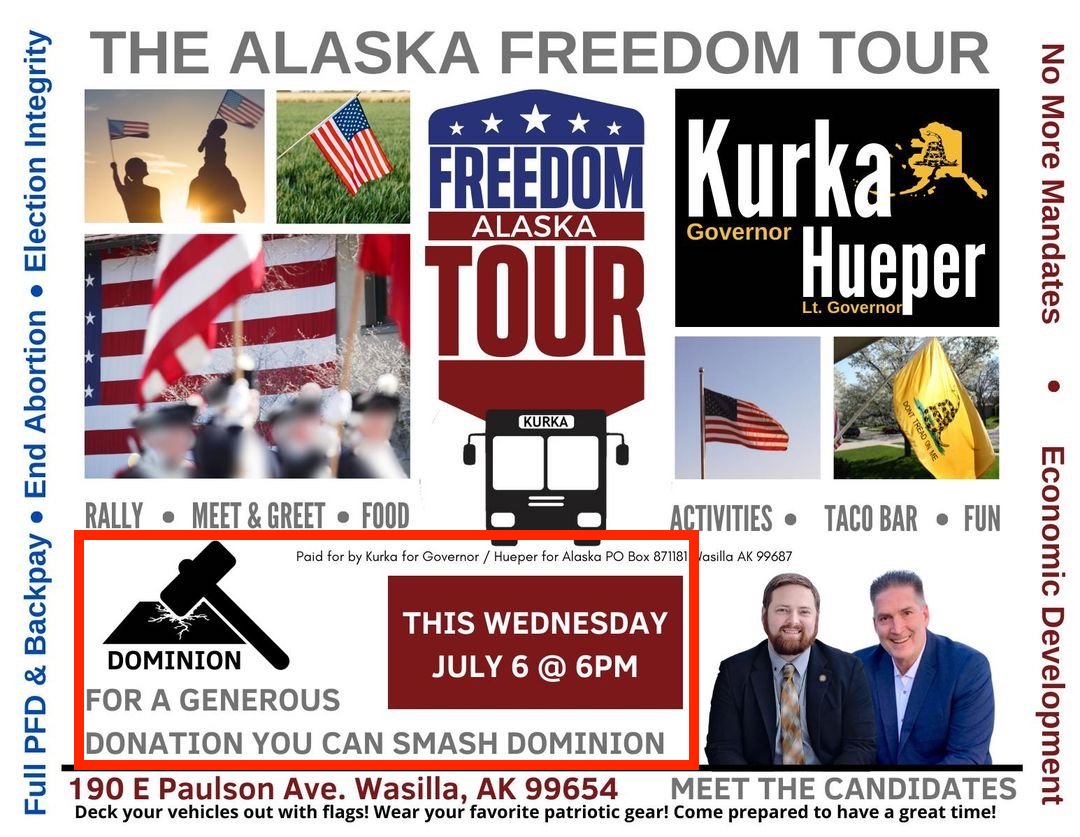 Rudy Shoeliani is busily promoting footwear. I really don’t know what’s going on here but they do come in pink which is nice – (still not buying). 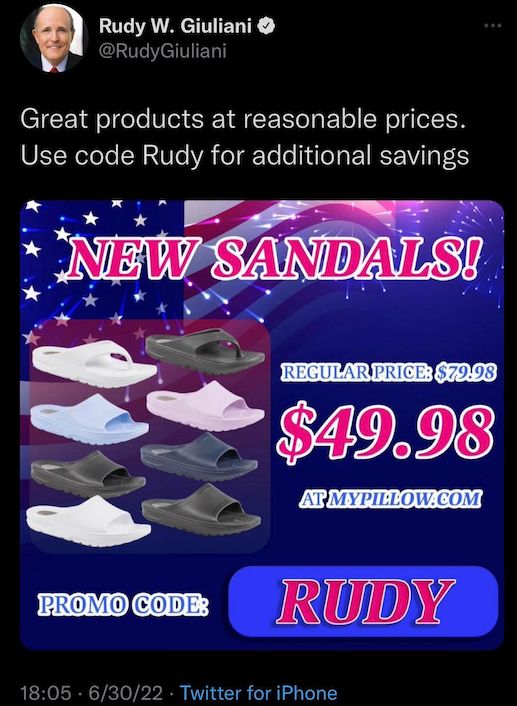 Rudy may be shoe selling for some extra cash because in June, the D.C. bar brought ethics charges against the former president’s most prominent attorney for pushing false vote-fraud claims about the 2020 election. It could also be that he’s in need of an infusion of cash because a Fulton County grand jury investigating Donald Trump’s potential criminal interference in the 2020 presidential election just subpoenaed him and Sen. Lindsey Graham.

Democratic candidate for U.S. Senate Pat Chesbro has been making the rounds attending pro-choice events in Palmer and Fairbanks. Have you seen any other senate candidates putting themselves front and center and speaking out on important issues? Me either (looking at you Lisa).

Video: Chesbro speaks at a pro-choice event in Palmer. 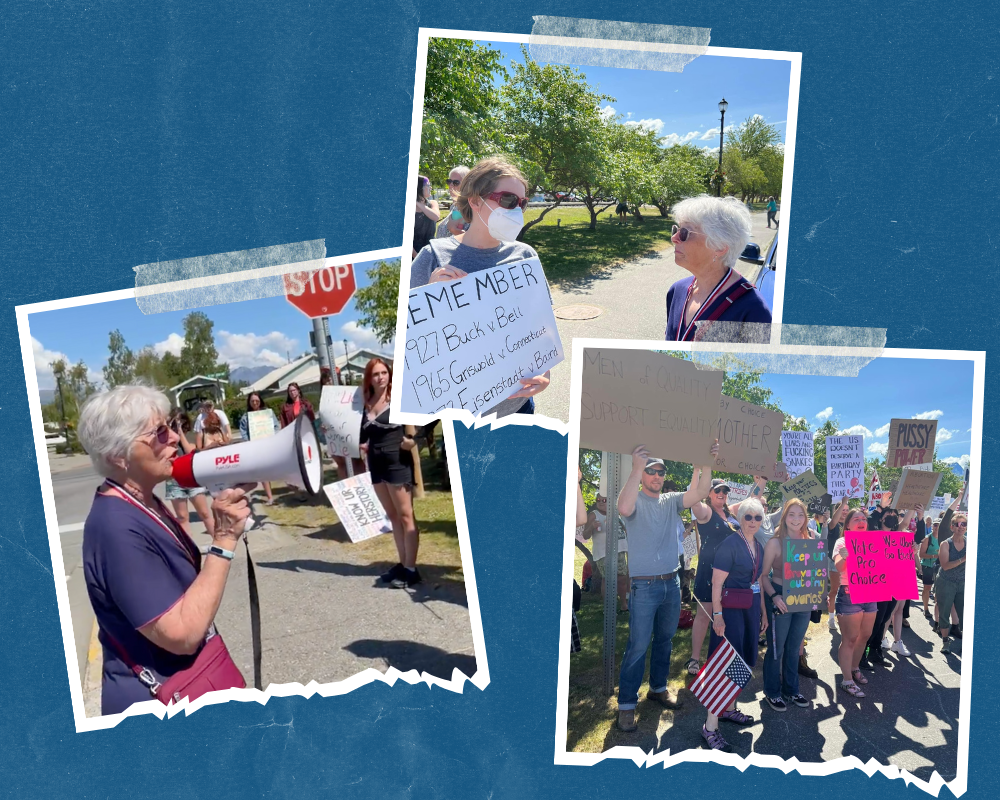 Pat is as Democratic of a candidate as you’re going to find—she’s there on all of the important issues we care about—reproductive freedom, climate change and gun control. She has earned and deserves our vote and Alaskans deserve better than the status quo. 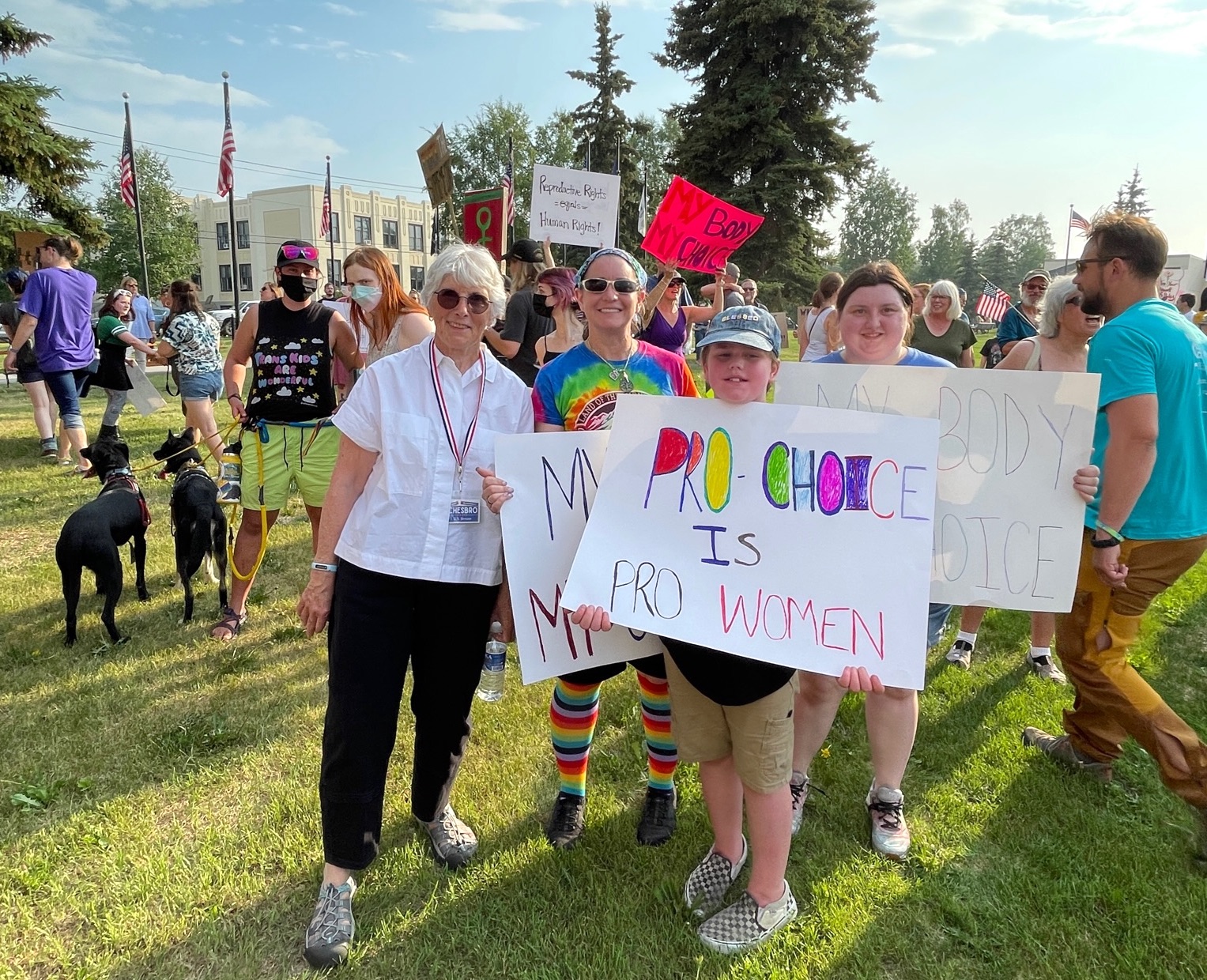 Maxine Dibert launched her campaign website this week! Dibert is a longtime Fairbanks educator (21 years) and is running against Republican Bart LeBon in highly competitive House District 31 where Democrats lost by 1 vote in 2018. LeBon, who had initially caucused with Democrats in recognition that the district was progressive, later turned tail after he became intimidated by the Alaska Republican Party. He needs to go.

I should probably point out that Dibert is in a three-way race. Not only does she have to contend with LeBon, she’s also facing off against MAGA Alaska Republican candidate and apparent potty-mouth Kelly Nash, who just called for the citizen’s arrest of individuals she’s deemed “indecent.” But don’t worry, she’s totally not an anti-LGBTQ demagogue because she has gay friends!

It sounds like Nash may have fallen victim to the Alaska GOP propaganda machine and has bought into the grotesque “groomer” narrative right-wing blogs and far-right anti-LGBTQ groups like Alaska Parents’ Right’s in Education are pushing.

Fairbanks, this district is absolutely winnable if you show up and turn out the vote! Let’s send LeBon packing and Maxine to the legislature! ⬇️

Speaking of Alaska GOP propaganda, can anyone tell us what’s going on here? It’s okay, you can say it. We all know. 🤮 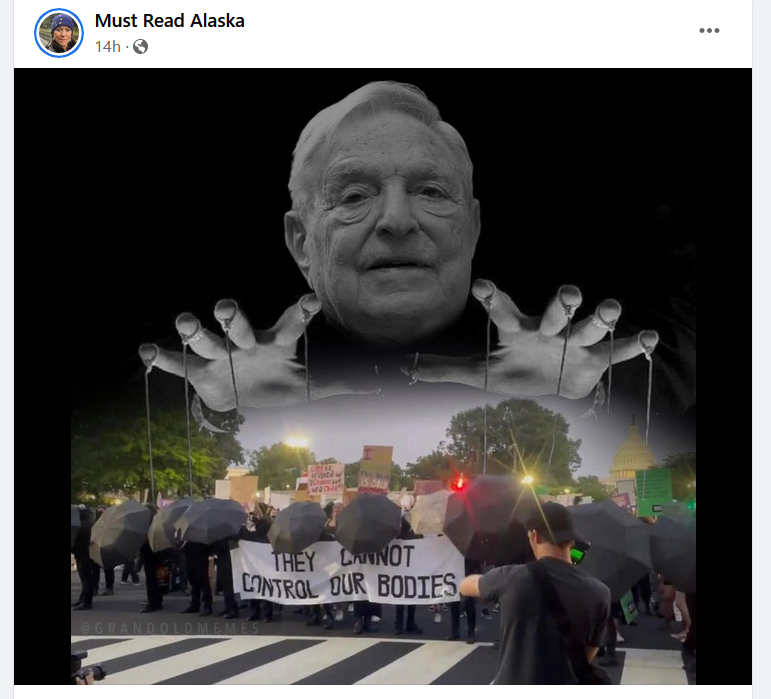 Les Gara and running mate Jessica Cook racked up the important and coveted Planned Parenthood endorsement last week because they represent the only pro-choice ticket running for Governor and Lt. Governor and because other candidates in the race simply cannot be trusted on the issue as they don’t have the unequivocal policy positions necessary to protect women’s rights. 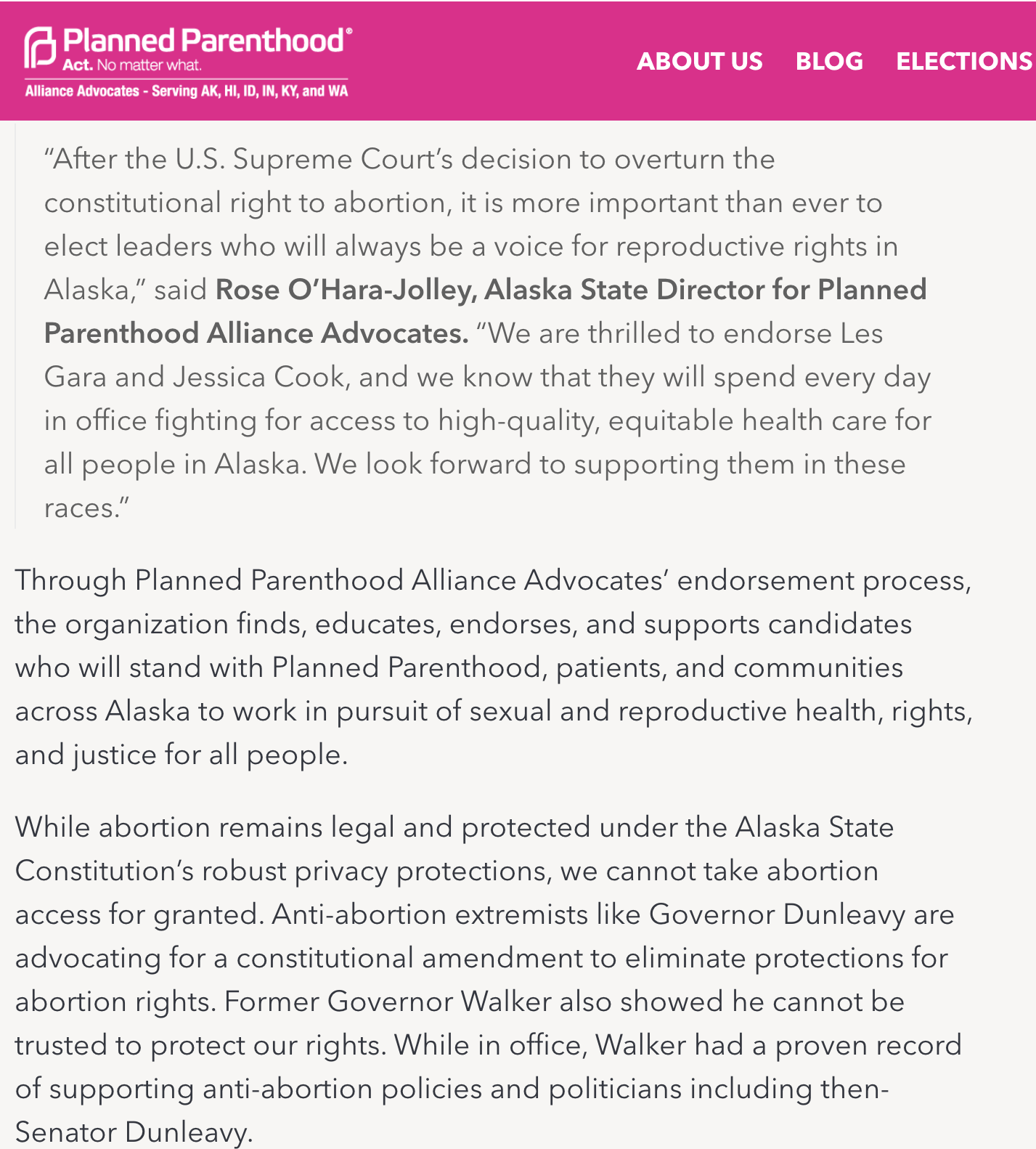 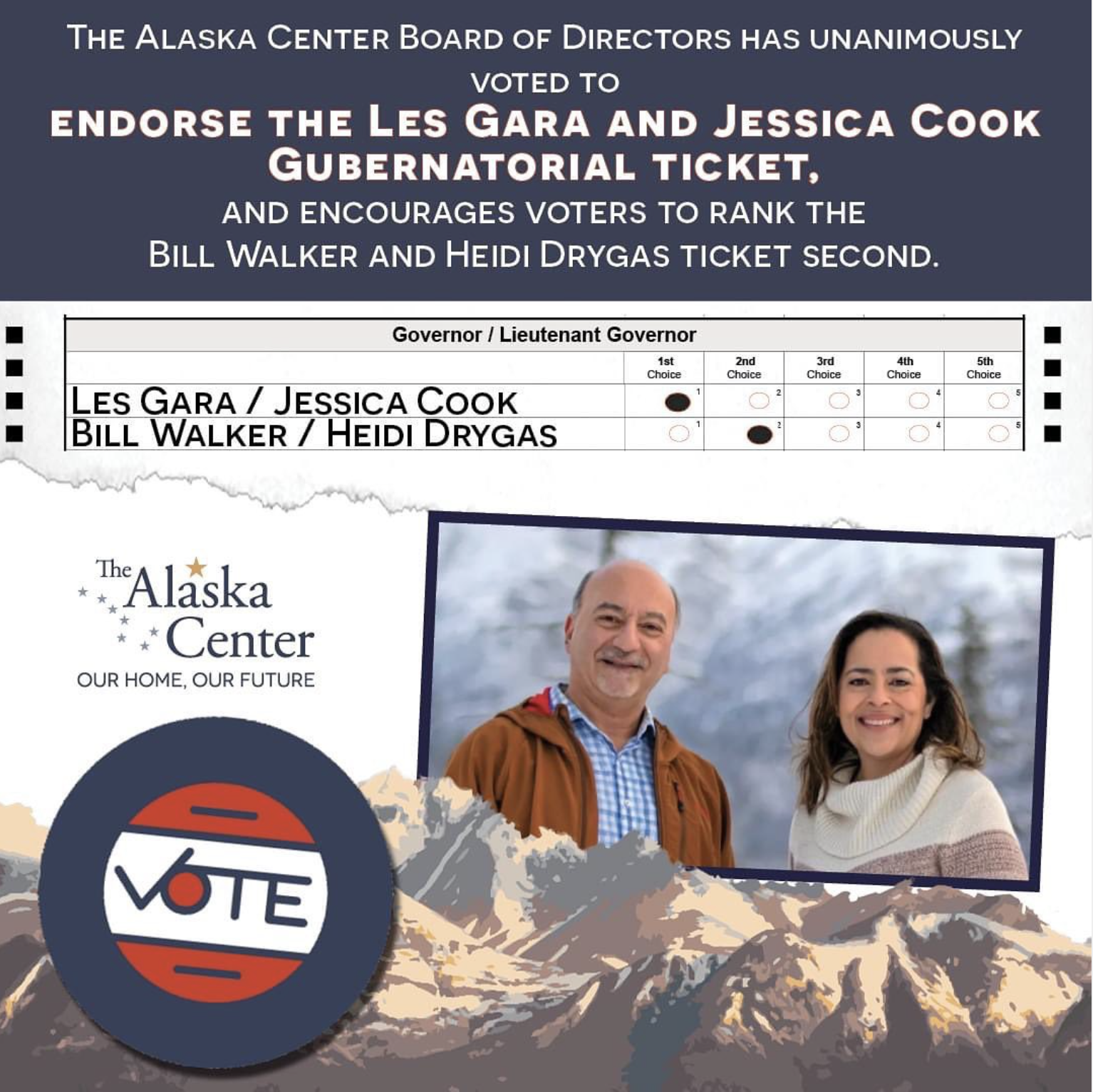 With the rights of women under attack and a federal abortion ban on the table, Justice Thomas signaling he wants to overturn precedents on contraceptives and LGBTQ rights to say nothing of the dangers of green lighting a constitutional convention here at home, it’s important we rally behind the only ticket that echoes our Democratic values on this important issue—Gara-Cook!

We definitely don’t want to re-elect this guy. (scary) 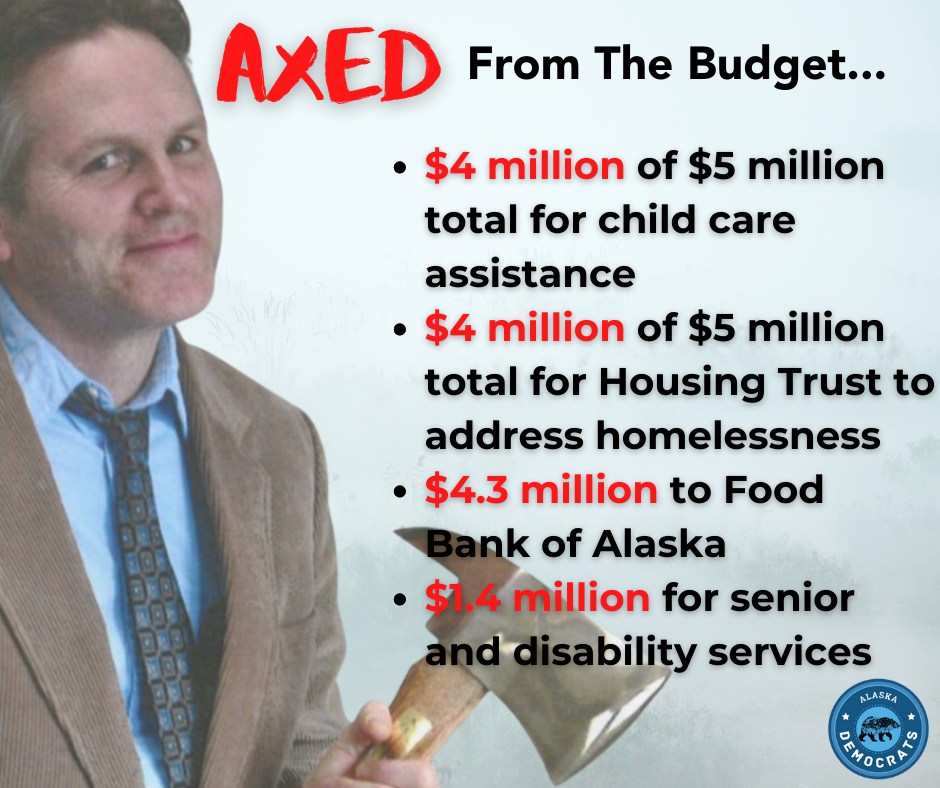 Jessica Cook was out making the rounds and getting to know voters Monday at the Delaney Park Strip. She took time to snap a selfie with state senate candidate Janice Park. 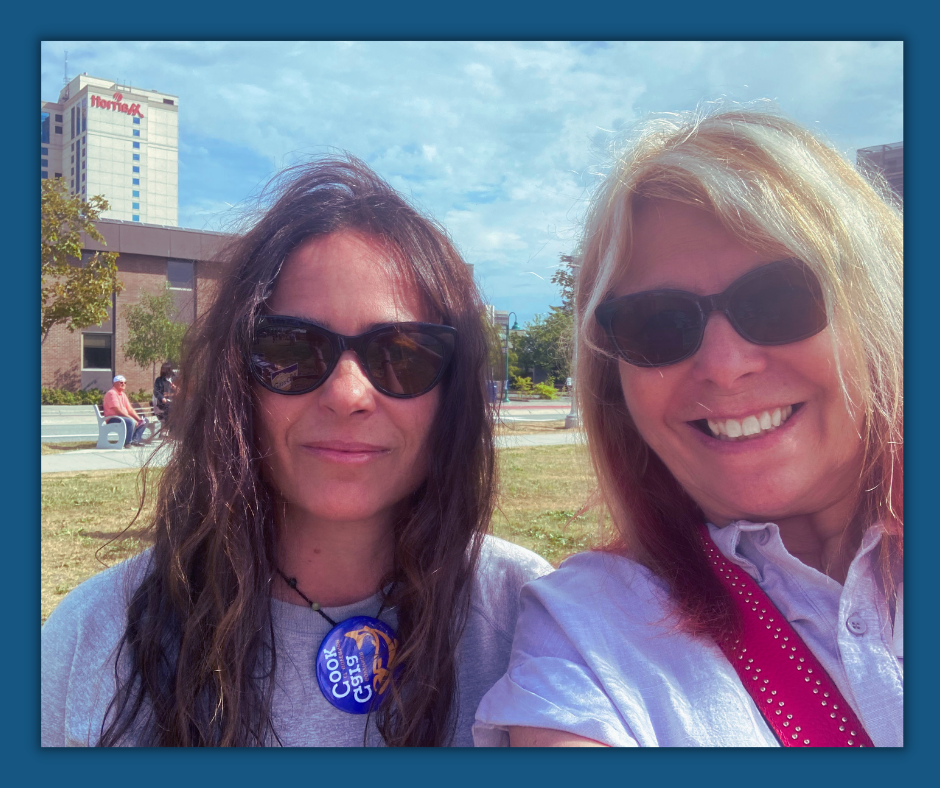 While other campaigns are spending their time gaslighting their social media followers into believing they’re pro-choice (they aren’t), Les Gara was in Juneau on Monday walking the talk with his parade team and his Bans Off Our Bodies sign. 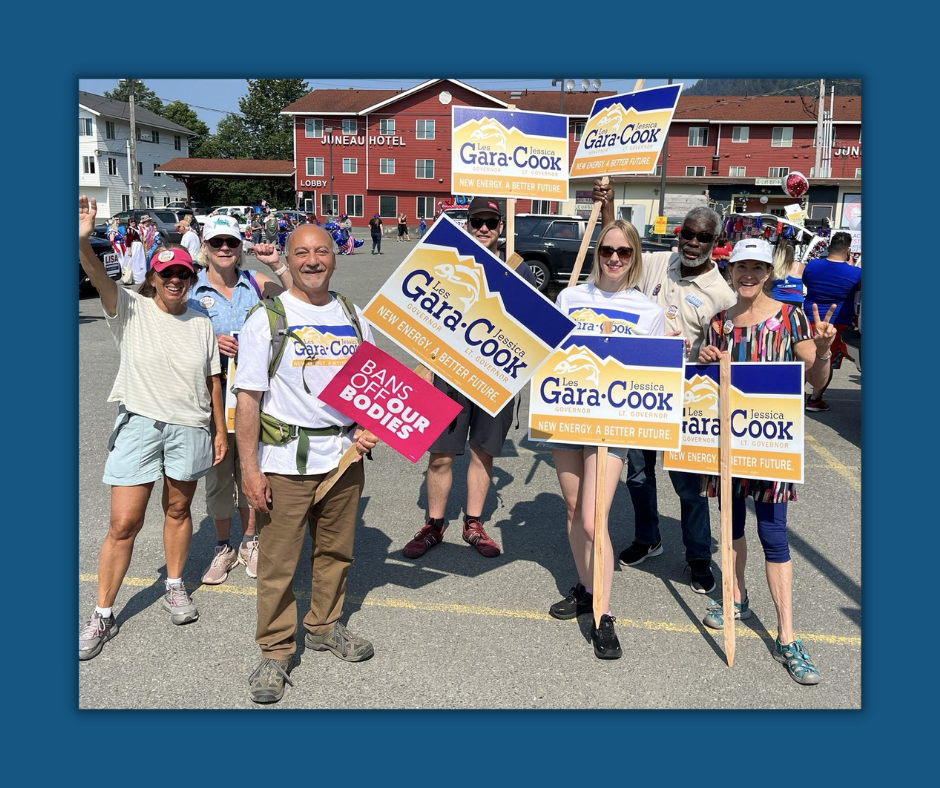 Join the Interior Democrats via Zoom this Friday at noon for their monthly Fahrenkamp Luncheon. This month’s speaker is Democratic candidate for the U.S. House of Representatives, Mary Peltola!